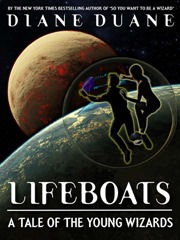 Diane Duane’s e-book store is currently running a 60% off sale on all e-books in its catalog, which should end sometime soon when the new Young Wizards novella, “Lifeboat,” is released. “Lifeboat” marks the final volume in a trilogy of novellas that forms a prelude to the next Young Wizards novel, Games Wizards Play. The exact end date/time of the sale hasn’t been announced.

On a related note, I’m pleased to announce Diane Duane will be my guest on an upcoming episode of the TeleRead Podcast. I plan to talk to her about the European VAT follies of late last year and what effect they’ve had on her e-book store, as well as the recent New Millennium Editions of the novels and the forthcoming new Young Wizards book. Any listeners who chat or phone in live will also have a chance to pose questions! The show is scheduled for July 25 at 12:00 noon Eastern Time.