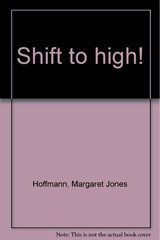 Our digital world feels complete and current, but there’s actually a lot of missing information. It’s not always so easy to notice, simply because it’s, well, missing.

The other day, I got to thinking about a young adult novel I read when I was younger, but hadn’t thought about in a long time. Called Shift to High!, by Peggy Hoffman, it was about a teenager who connived his way into into going along with his older brother when he and a friend went on a camping tour of New England in an old car they’d fixed up.

Out of curiosity, I did a quick Google to find out more information about the book and the author—and came up with, by and large, a big fat donut. There were a couple of different listings for the book in Amazon Used—one with a listed date of 1945, and one with a date of 1965. There was a review from Kirkus that indicated 1965 would be the correct date. There were listings for the author on AbeBooks and WorldCat. But that was about it. I couldn’t even find any cover art for it!

Actual information about the author was amazingly thin on the ground. This is someone who was able to write multiple books that were deemed good enough to be accepted and published by a mass market publisher back in the day, and yet she doesn’t even merit a Wikipedia entry! A Google Books search turned up a listing in a reference book called Something About the Author, volume 48, with enough of a snippet to indicate that it was about the right person but not enough of one to be all that useful. If I were to want to find out more about her and her books, I guess I’d have to find a library that has the book and go there. (But at least that’s more information than I could have dug up from home before Google Books.) It’s a bit of a rude awakening for someone who has grown used to being able to find all the information he could want about anyone or anything online.

It’s tempting to ascribe this to the problem with “orphan works,” only I’m not even sure that’s necessarily the right term. I don’t know whether it’s an orphan work. I can’t find enough information about the author to determine whether she’s even still alive, let alone whether she has heirs. It’s like the light from some distant star—you can tell it existed at one time, but it’s so far away in the distant past you can’t tell much of anything else, even whether it still exists anymore. It’s not even an orphan work, it’s a “might-be-an-orphan work.”

I remember enjoying the book when I read it, and I imagine that kids today might also find it interesting to read about what the world was like fifty years ago. But how would you get it into their hands? How would they even know about it? The publisher is probably defunct (or part of some other publisher who’s part of some other publisher by now), and the author has vanished into obscurity. If I wanted to get my hands on the book again, I could order a used paper copy from somewhere, but that’s about the only option. I certainly couldn’t get it on my Kindle.

We live in a time when it would easily be possible to scan the book in, make it into an e-book, and distribute it (either freely or cheaply) on the Internet. It’s certainly not earning any more money for the author or her heirs right now. But how could you even find that person?

My pipe dream would be for there to exist a non-profit organization like Project Gutenberg, but for possibly-orphan works rather than public domain ones. Such an organization would be staffed by and made up of people who specialized in doing more thorough research into authors and their heirs than some random guy could do on the Internet. They could field requests by people for defunct books like this, and then go out and try to find whoever has the rights now and see if they’d be interested in releasing an e-book. If so, they publish it at a reasonable price, taking a publisher’s cut and paying the heirs the author’s share. If they can’t find the people, the books could go onto a list of works that are truly orphaned and could perhaps be rescued if copyright reform legislation makes doing so less risky. But it would kind of have to be a non-profit, because most orphan works are obscure enough that there wouldn’t be sufficient demand to make a profit on republishing them.

This is just one long-gone book by one obscure author, that I happened to run across because I was curious. I’m sure there are plenty more out there. They represent a part of our culture that has vanished down the memory hole of excessively-long copyright, and as it now stands there’s no easy, legal way to retrieve it. And that’s just a pity.