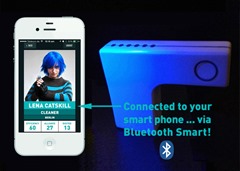 Everything’s better with smartphones. Reading, navigating, playing silly games…and possibly, that might soon include laser tag. Yesterday I found out about a game called Dustcloud, which is undergoing a Kickstarter right now that wants to combine laser tag, the game of “Assassin” (often played with water guns or paintball pistols), GPS, and social networking, for a geolocation-based game you play anywhere, on the spur of the moment, with total strangers. It’s been getting some good buzz from news sites such as Engadget, Re/code, and Time. It looks exciting, and I’ve gone ahead and kicked in for it, but I must admit I’m not sure how successful it can be in this form.

The idea behind the game is that you shell out for a “Duster,” a little plastic pistol-shaped gizmo with a ZigBee micro radio transmitter and receiver built in. (The Kickstarter price for a Duster is $45, though there are were around 70 early-bird units still available for $39 when I wrote this.) You get a supply of “digital bullets” called “speks” with it—your gun holds six at a time—but when they run out, getting more costs 5 cents each. (At least for the cloud-enabled version of the game. You can also play it “offline,” just like normal laser tag, with unlimited speks.)

You register with Dustcloud’s social network, and tie it into the GPS on your smartphone so that your location is visible to other Dustcloud players. When another player comes within range, they can “challenge” you through the social network. You each get to see the picture of the other from the social network profile so you know who to look out for, and you get the choice of whether to accept the challenge. If you accept, then your guns activate. You must close to within about 5 meters of each other, aim your directional Duster at theirs, then pull the trigger.

Whoever shoots first disables the other’s Duster, wins possession of however many speks were in their gun’s magazine (which the other player thus loses—so losing a fight could cost up to 30 cents a go!), and sees their rankings go up in the social network. But that winner better look out, because if the loser has nearby friends he can automatically notify them to avenge him!

Geolocation games are one of the hottest new frontiers these days. Google’s Niantic Project’s Ingress game for Android (which I also play), which involves visiting particular spots in real life and tagging them electronically to show you were there, just came out of beta last month, and will be expanding to iOS this year. It’s already got thousands of players (a number of whom, I gather, have become interested in Dustcloud for its Ingress-like similarities). Likewise, I have friends who enjoy games like “Zombies, Run” and “The Walk” which promote fitness by gamifying jogging or walking. Waze, cited as a category winner in that infographic a few articles back, gamifies and socializes driving. And I’m hopeful Dustcloud will take off, because after all, who doesn’t enjoy a good game of laser tag?

The Dustcloud people have some intriguing plans for the future of their game, assuming it gets off the ground. While it’s set up to work with smartphones right now, they see wearables such as Google Glass as more natural partner devices, since they can give you navigation information in real time and also raise or lower the volume of sound effects as you get closer. They’re also looking into adding a game mechanic whereby players can claim territory as their “home turf” and defend it.

The game looks like a lot of fun. And if you’re going to develop something like this, you can certainly do worse than to do it in Prague, which has that specific type of old-world charm that makes everything shot there (including the Kickstarter’s promotional videos) look like a spy movie.

That being said, I can see a couple of major problems with Dustcloud in its current implementation.

First of all, the big reason Ingress went so viral is that you don’t need any other equipment besides your phone or tablet to play it. If you’ve got an Android device, you could go to the Play Store, download Ingress for free, and start playing as soon as you finish reading this article. (I recommend it; it’s great fun, a good excuse for enjoying the outdoors, and a neat way to meet a lot of friendly people in your area.) You don’t have to shell out big bucks for a gun, and shell out little bucks as you use up ammunition. (In fact, there already is at least one “mobile assassination game” you play with just a camera-enabled smartphone, though it hasn’t exactly gone viral either.)

And like Ingress, this game really depends on the network effect; if you’re the only player for hundreds of miles in any direction, what’s the point? A game like this really needs the support of a major toy or game manufacturer to bring the price down and get it in all the major stores so there can be more players everywhere. If the Kickstarter succeeds, perhaps it can attract that kind of attention? Who knows.

Another problem is that geolocation games are already a great way to make police, security guards, etc. suspicious of you just for wandering around with a smartphone. How are they going to react seeing you holding a little pistol-shaped something in your hand? (At least one kid was fatally shot playing the original Lazer Tag—the sci-fi looking gun actually did bear some resemblance to some real-life submachine guns, especially in the dark.)

The Dustcloud folks have tried to make the Duster look less like a real gun by lighting up red, blue, or green all over, and putting the trigger at the front of the top so that you actually hold it in a different way from a real gun. But on the other hand, this could be an area where the Duster’s very concealability works against it. It’s about the same size and shape as a small handgun, like the Colt Mustang .380, and if a cop sees someone wandering around furtively holding a gun-shaped something they can’t quite make out, what are they going to think? Sounds like a recipe for legal liability. Hope they have good lawyers.

Still, I’ve kicked in for an early-bird Duster, and harbor some hope that others in my area will as well. (Though with the numbers they’re looking at for their first run, it seems unlikely. Probably this version will see the most play among people who already have groups of friends who could all go in together on one of the higher pledge levels.) The Kickstarter has reached almost $15,000 of its $100,000 goal with 38 days to go, so it looks like it has a good chance of making it if the buzz picks up.

I must admit, assassin games have come a long way since Gotcha. The question is whether this one has the legs to make it even if the Kickstarter goes through. I’m hoping the answer to that is yes.