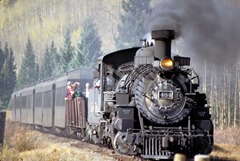 TeleRead writers traditionally have been strong supporters of e-book standards. No blinking. No hesitation. ePub is the way to go in most cases.

The majority of us have just hated proprietary formats even though companies like Amazon make them hard to avoid. Proprietary formats remind us of the time when trains commonly ran on tracks of different gauges.

But as TeleRead’s owner, I’ve made it clear we don’t have party lines.  And today’s beautifully written essay from Chris Meadows, my friend and much-appreciated colleague, illustrates this.

Mind you, Chris isn’t directly cheering proprietary formats. He is just saying retailers and customers really don’t care that much.

Now, however, let me rephrase the question in Chris’s headline, "Does anyone even want cross-platform e-book interoperability?" How about instead:

1. "Does anyone want e-books with which to build a permanent library? Whether or not a vendor goes out of business?"

Look what happened to Fictionwise. Luckily I’d anticipated this might happen, and I hadn’t bought many DRMed books there. But those I did buy were a hassle to transfer to B&N. And even then I lost a few titles.

2. "Does anyone want to be able to easily organize the personal library in one place without need for special products or consideration of e-book formats?"

Just to address one related issue here and in Point Number One, I wish that the current tech-based DRM would go away or be replaced by social DRM that worked no matter what the platform. Really. This would be better for both customers and the industry. See Point Number Seven.

The best DRM is no DRM. Social DRM has privacy issues. But it’s a lot better than “protection” with both privacy and compatibility ones.

3. "Does anyone want more freedom of choice as a book shopper?"

Remember, Amazon in various ways encourages writers to publish with it exclusively.

4. "Does anyone want the capability to read books with a device or e-reading app of his or her choice?"

In terms of features, Amazon’s e-reader is fifth-rate compared to, say, Moon+ Reader Pro, which offers text to speech for cell phone owners.

Proprietary formats hold the industry back by making it harder for innovative companies to market new products. They also get in the way of accessibility. The recent E Ink Kindles lack text to speech.

On top of that, at least on specific devices and under certain circumstance, Kindle apps and other proprietary ones may underperform open alternatives.

5. "Does anyone want to make it harder for corporate marketers and government to snoop on us?"

The more tightly bound you are to a company’s ecosystem, the easier a target you could be for federal snoops who could even monitor what pages you’ve read or what you’ve written in your annotations.

And, yes, the lines between governments and corporations have blurred. I have no idea if Amazon is spying for the CIA. What is clear is that it’s a CIA contractor as a supplier of cloud services.

Furthermore, what ends up in D.C.’s files just might end up in those of the Chinese government—ready for blackmail purposes. Washington is much, much better at undermining citizens’ rights than it is in protecting data. Oh, and no rightwing extremism here. I’m a lifelong progressive Democrat who voted for Obama.

6. "Does anyone e-books to be of higher quality in typography and other respects?"

Why replicate R&D? The Readium initiative shows the promise of industrywise cooperation. Whoops. Industrywide. But, yes, I actually like that typo.

7. "Does anyone want the e-book industry to grow?"

The more people learn the negatives of proprietary tech, the less likely they are to buy e-books (even if they are not techies). Michael W. Perry says he is not buying E  the way he used to. Flattening sales or at least slower growth would suggest he has company.

Concluding, Chris writes that "Amazon’s customer base…wouldn’t know what to do with interoperability if they had it." Um, I’m not so sure about it. Words like "interoperability" may baffle many. But long term, most people in fact would appreciate such little trifles as being able to build a personal library for real.

May I also add that as a writer, I consider permanence to be one of the more attractive advantages of books as a medium? Proprietary formats and DRM, in that regard, severely detract from the value of books.

If the industry can’t get its act together through the International Digital Publishing Forum or otherwise, yes, the government should step in. I know. I’ve already told why Washington’s snoops might love proprietary technology. What’s more, as shown by the FCC’s failure to make Kindles and other readers more accessible despite disability legislation, big corporations still own D.C.  But today is not forever.

Meanwhile, via customer support dialogues and other means such as Amazon’s forums, you can speak out and make clear your loathing of proprietary formats.

Amazon and the others are market-driven creatures. Complain loudly and often enough, and you’ll increase the chances of meaningful interoperability happening without government regulation.