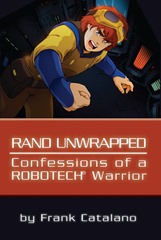 It’s no secret that the animated TV show Robotech had a big formative influence on me when I was growing up. I still use the handle “Robotech_Master” for my Twitter, Facebook, and other personal Internet accounts, and I still love the show. And my main foray into podcasting, Space Station Liberty, is about Robotech.

On Space Station Liberty, I’ve interviewed a number of the actors and writers associated with the show, including the late Carl Macek himself. Today at 10 a.m. Pacific/1 p.m. Eastern, I’m going to be interviewing another: Frank Catalano, voice actor for the characters Rand, Lt. Dennis Brown, and others from the show.

Catalano has written a book about his experiences working on Robotech and how he developed the character of Rand. This book, Rand Unwrapped: Confessions of a Robotech Warrior, is available from Amazon for $9.99 in Kindle or $17.99 in paperback. As one of the only personal accounts written by someone who took part in the program’s development, it’s a must-read for any Robotech fan. But it’s also worth reading by anyone interested in the acting or voice recording process.

Rand Unwrapped is part memoir and part acting lesson. Catalano talks about how he got into voice acting (he started out dubbing and writing dialogue for Ultraman sequel Ultra Seven while attending graduate school in Hawaii), and later learned about Robotech through friends. He explains how an actor develops a character, and how coming up with a character for pre-existing animated footage differs from doing it for an original show or stage acting. He discusses the process of coming up with dialogue to match the lip movements of characters on the screen. And he illustrates these stories with anecdotes from his childhood in the Italian-American community of New York. (Such as the time when, at the age of 7, he punched out a nun.)

Robotech fans will especially enjoy Catalano’s discussion of his interpretation of Rand’s character, and how Rand related to his New Generation cohorts. The biggest thing I took out of it was that creating a character like Rand is not just a process of coming in and “doing the voice.” You have to figure out who the character is and where they’re coming from for any acting endeavor, even if it’s just matching words to a celluloid image who has no independent existence outside of that screen. The character has to be real to the actor, or he won’t be real to the audience either.

But Rand Unwrapped isn’t just an interesting story about Robotech or acting in general. It’s also a personal exploration of what it meant to grow up in a certain place and at a certain time, and how Catalano was able to take those influences from his childhood and express them through the characters he acted.

It’s also a look at the deep respect Catalano has for the characters, the show, and the show’s fans. There’s a great story about the time Harmony Gold sent him to a New York toy fair dressed as Rick Hunter (see picture at left) and fans kept recognizing his voice and pointing out that he was dressed as the wrong character.

The book isn’t perfect—its really-long paragraphs are sometimes awkward, and there are a few typos and homonyms that should have been caught during editing—but on the whole, it’s a fascinating look both at the early history of Robotech, and into acting itself. (Who knows; if I could have read it twenty years ago, maybe I’d have changed my major, or at least taken some acting classes in college.)

Be sure and tune in today, or download the episode later, for when I interview Frank Catalano about the book and his work on Robotech on my podcast Space Station Liberty. You can even call in and speak to him via regular or SIP VOIP phone after my questions are over. Hope I’ll see you there!