Easier downloads of OverDrive library books are on the way “relatively soon” for Kobo e-readers and apps.

OverDrive CEO and Founder Steve Potash revealed this during a TeleRead interview. The entire Q&A will go online in the next few days.

OverDrive now supports Kobo devices through sideloading. But in the future, users apparently will be able to benefit from integration in their e-readers and apps similar to how OverDrive works with Kindle e-readers and apps. You choose a library book within OverDrive, then send it to your Kindle’s library and open it up there as if it’s a regular Kindle book you bought.

Kobo owners right now are not so lucky even though the Japanese company Rakuten owns both Kobo and OverDrive. They must use Adobe Digital Editions and a USB connection to sideload books. Look how convoluted the process is (just as it is for owners of B&N’s E Ink devices).

Props to OverDrive for efforts to streamline this for Kobo users with an approach apparently similar to the one used for Kindles.

“It should be no surprise,” Potash told TeleRead, “but with our partnership with Kobo and Rakuten, we are working very closely now with Kobo to expand the value of the Kobo app and Kobo readers. And we expect that we will have good news for Kobo users for conveniences where they can enjoy library and schoolbooks from OverDrive in their Kobo reader environment.”

While Potash doesn’t have an exact timetable, he  assures TeleRead that “it’s something they can expect to see relatively soon.”

I own a Kobo Aura H2O, and I very much look forward to enjoying OverDrive library books more easily on it. My Kobo, unlike my Kindles, lets me adjust the amount of bolding—from none to plenty. See Aura H2O photo below showing the font-weight adjuster and other amenities AWOL from Kindles.

With a greater range of typographical choices in the Kobos than in Kindles, libraries may want to reconsider their options when looking for e-readers accessible to older patrons and K-12 kids with special needs.

Of course, if Amazon can catch up and itself add an all-text bolding option, ideally through a font weight slider like Kobo’s, that will help. So would text to speech in future E Ink Kindles and Kobo e-readers.

Meanwhile let’s hope that OverDrive books will remain readable on Kindles and within Kindle apps. The more choices for patrons of public and school libraries, the better. – David Rothman 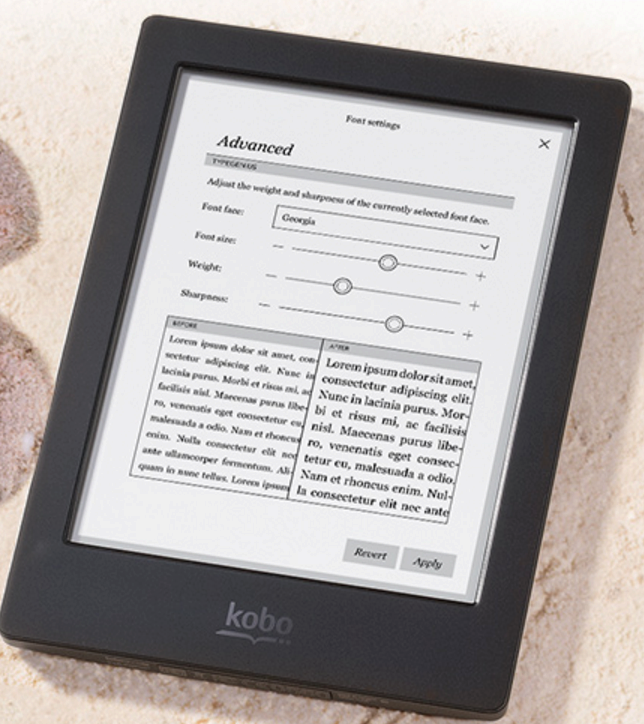