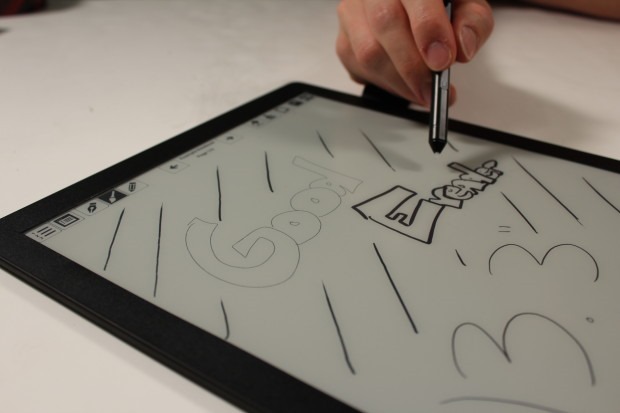 This is especially impressive given how badly Kozlowski’s earlier Kickstarter project, for a smaller Android e-ink reader, fizzled. You wouldn’t think that, if no one wanted a cheap reader, a super-expensive one would sell like hotcakes—especially given the somewhat risky nature of backing any expensive crowdfunded hardware project—but apparently this was an area of the market that is being badly underserved, and Kozlowski was lucky enough to see it.

Granted, 131 people isn’t exactly hotcakes as far as the larger market is concerned, which could number into the thousands or tens of thousands of units at least, but it’s a good sign given that riskiness I mentioned.

And other companies are banking on it, too. A couple of days ago, Nate Hoffelder reported on The Digital Reader that the Onyx Book Max, one of the only other competitors in the 13.3” e-ink document viewer space, has become available for pre-order on the US, UK, and Canada Amazon stores. It’s due to release on May 20, and pre-orders ship direct from China. The price is US$650, £460.00, or CDN$835, respectively. Meanwhile, a German e-reader store is selling it for €696.15  to Europeans (including VAT), or €585 shipped to people outside the EU, but reports a 4-week manufacturer delay.

I don’t know exactly how the Onyx differs from the Good e-Reader model—they have the same screen, both run Android 4, and seem overall comparable in general. It might be that people who want to avoid the risk associated with crowdfunding would be just as happy paying a little less for an Onyx, which is more of a sure thing and will arrive sooner.

That said, I wonder whether other hardware manufacturers will take a cue from these obscure readers and come out with their own 13” models? Given that Amazon discontinued the Kindle DX some time ago, it doesn’t seem that it sees any percentage in over-sized readers—but people who want them certainly do want them.