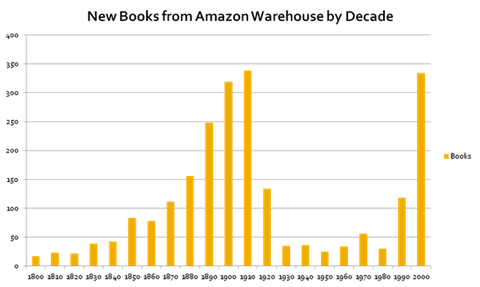 Techdirt has posted some charts that provide an excellent example of the big gaping hole in popular culture created by current copyright laws. The charts show the availability of works from different decades in a number of different contexts—the number of new books shipped from Amazon warehouses by decade, works available on Europeana by decade, and so forth—but they all have a remarkably similar shape: a big gap in the middle with much higher levels to the left, for public-domain titles, or at the right, for recent titles.

Techdirt also posts a chart from from William Patry’s book Moral Panics and the Copyright Wars which shows how few titles from different media were renewed in 1958-9, when copyright required a renewal after the first 28 years. The rights-holders of only 7% of books and 11% of periodicals even bothered to renew them at the time.

This leads to works like Shift to High! being unavailable to entire generations of people who could enjoy them—except via sites like Open Library that are technically in violation of copyright themselves. Nobody’s going to find it worth the effort to hunt down the heirs of some obscure young-adult book in the hope that they might be able to republish it—because how many people would care enough about a sixty-year-old book by an author they never heard of to buy it?

I continue to harbor the hope that sooner or later people will wake up to just how harmful extended copyright periods are and reverse the trend. Now that e-books are so widely available, many of these works could easily be republished at minimal cost—but that’s not going to happen for books whose authors could be dead and whose rights inheritors might not even be aware that they are.