It’s one of the scourges of the digital age. You’ve probably read about it somewhere—the idea that staring at a glowy LCD screen destroys your natural melatonin production and makes it hard for you to sleep, because of the surplus of blue light wavelengths. (And it may even lead to other health problems.) You may be unsure to precisely what extent it’s true, and to what extent it’s the new form of placebo voodoo. (Some of the claims, linking it to diabetes, heart problems, etc. do seem a trifle extravagant.) And what can you do to solve the problem if it exists?

You could start wearing blue-blocker sunglasses all the time. But if you’d rather not look like Bono from U2, here’s another option: a free software package called F.lux, available for Windows, Linux, Mac, and (jailbroken) iOS. (It’s not available for Android yet, but there are a number of similar Android apps.) F.lux takes control of the color temperature on your screen, dimming the blue and green light from sunset to sunrise. Not only does this ostensibly prevent sleep degradation, it also makes the screen easier to look at when you wake up in the middle of the night.

I’m trying it out now, in the middle of the night. I don’t know whether it’ll make it easier for me to sleep, but I have to admit, it does make the screen easier on my eyes. It also gives everything kind of an orange cast—especially things like Live Writer and Chrome, where the default background is white. But I think I could get used to it. And let me disable it for a moment, and wow, it’s pretty bright. There is also an option to let you disable it for an hour if you’re working on something that’s color-sensitive.

If you’re curious about whether F.lux actually “works” for its stated purpose, I was curious about that and googled around on it. The jury seems to be out on whether it’s truly “effective” at making you sleep better or it’s just the placebo effect. But one thing a lot of people do tend to agree on is that it does reduce the amount of squinty eyestrain you get from peering at the screens at night, so it may be worth using just for that. (That’s certainly the case for me, given that I tend to spend a couple of hours awake in the middle of the night, staring at my screen.) If you can get used to your screen’s new orangey color, anyway. 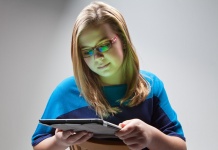