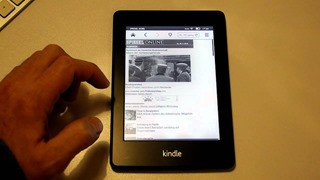 The FCC has issued an order (PDF) once more extending its waiver on e-ink readers requiring disabled access features for Advanced Communications Services (ACS) for another year. The order means that e-readers like the e-ink Kindle will not be required to implement such features at least until January, 2017, when the FCC will examine the issue again.

A footnote in the FCC order states:

Devices that are made primarily for the purpose of using these advanced communications services (or multi-use devices like smartphones where one of the primary purposes is using such services) are required to have disabled-accessibility functions built into them—text-to-speech, high-contrast fonts, voice command capabilities, and so on.

But devices that are primarily intended for doing something else can qualify for a waiver on those requirements. This is where e-ink readers come in.

The thing about e-ink readers is that they are primarily meant for the sole purpose of reading e-books. They have some very limited ability to access the Internet, but nothing on the order of what you can do with even a smartphone, let alone a full-fledged tablet. It’s hard to imagine doing voice-over-IP or video conferencing with an e-ink Kindle. You can do some forms of e-mail and instant messaging with it, via the web, but even that is notably awkward. E-ink readers are not designed primarily for using such services. Hence, they get a pass on being required to incorporate accessibility features.

It’s worth noting that this ruling has nothing to do with whether accessibility features, such as text to speech, are or should be required for the purpose of reading e-books. Even where the order does mention text-to-speech, it mentions specifically that it “would be used to have conversations over ACS”. It’s talking about using text-to-speech to read you your email, not to read you an e-book.

The order just says that e-ink readers don’t have to have accessibility features for the purpose of using ACS, because they’re not mainly meant for using ACS. Effectively, there are other devices that are meant primarily for ACS (and some of them, such as the $50 Amazon Fire, are even cheaper than the cheapest Kindle), so if someone needs ACS accessibility features, he should just get one of those.

Last year, David covered the waiver process, starting with mentioning the FCC’s comment form in January, then complaining that the FCC allowed the waiver to stand and suggesting that Amazon really should make more accessible e-readers even without the FCC requirement. The thing is that, thanks to the $50 Fire, they kind of are.

From the point of view of making it easier for the disabled to use as many devices as possible, I can see that it would be good for e-ink readers to have accessibility functions such as text-to-speech. But in a broader sense, I’m not sure they’re really needed.

There are plenty of inexpensive devices that can read e-books these days, such as the aforementioned Amazon Fire. If a blind person wants to have an e-book read aloud to him, why can’t he just get one of those? It’s not going to make much difference to him whether the screen is LCD or more legible e-ink, since he won’t actually be using the screen. Isn’t the important thing that the book does get read in the end, not what kind of device the person uses to do it?

I can see where incorporating text-to-speech features into a Kindle could make them more expensive to manufacture, as well as use up the battery sooner, making them less fit for their own primary purpose—reading e-books. More importantly, I’ve already noted that sales figures show e-ink readers are on the decline. Their economy of scale is diminishing, so they’re effectively getting more expensive to manufacture per unit sold already. Why add additional expense on top of that for devices fewer and fewer people use, and that already have a perfectly acceptable alternative in the form of an inexpensive tablet?

If it really is important that e-ink readers have accessibility functions for the sake of reading e-books, then the features should be considered specifically in that context. This ruling isn’t even about that purpose—it’s about whether they should be required for the sake of using the Internet, which isn’t even the main thing e-ink readers are meant for. Perhaps someone should petition the FCC to require accessibility features specifically for reading e-books instead.