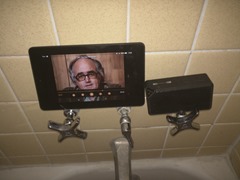 One of the big weak spots of the $50 7” Amazon Fire tablet is its tiny little speaker. If you’re trying to watch a video in any kind of even slightly noisy environment, it can be nearly impossible to hear. Earphones are one possibility, but sometimes you’re in an environment where that kind of thing just doesn’t work.

Case in point: I’ve started watching videos while I take baths lately. In this case, I’ve been working my way through James Burke’s Connections and The Day the Universe Changed series. But I can’t exactly wear earphones while I soak. (At least, not if I plan to wash my hair.)

But I found a handy solution in an old Jellybox Bluetooth speaker I had kicking around. I bought it a couple of years ago, when manufacturer OrigAudio was running it on sale, along with its recycled cardboard folding speakers. The folding cardboard speakers turned out to be not all that great, but the Jellybox has some great sound for its size—and its size is a lot bigger than the one built into the Fire.

The Jellybox claims to support stereo sound, but I can only see one actual speaker driver in the thing when I shine a flashlight through the front grill, so maybe it just pipes both channels through one speaker? Regardless, it’s very loud when turned all the way up. It also offers a micro-SD slot for playing music directly off an SD card, and a built-in microphone for speakerphone functions. (Our former sister site Technologytell has a review of it.)

The one minor drawback is the speaker’s $40 price, which is almost as much as the Fire itself. Indeed, for the same cost you could get a much bigger AmazonBasics Bluetooth speaker. But there are less-expensive Bluetooth speakers out there, such as this $25 model. Alternately, you could splurge on a really good Bluetooth speaker, such as the $169 Jawbone Big Jambox. Such a speaker will work with any Bluetooth device you have, after all.

Maybe watching videos in the tub isn’t your thing, but the nice thing about the speaker is that it’s just as good for any listening task where you want your hands free but nothing in your ears. Listening to music or audiobooks while you work in the kitchen would be another possibility.