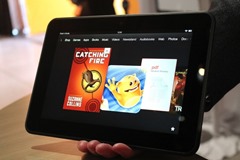 As if you didn’t have enough to worry about with Amazon’s Fire tablets not having access to the same breadth of apps as other Android tablets, new reports are emerging from the Amazon forums that some owners of Fire HD devices have been waking up to find their devices factory reset themselves overnight, apparently due to a new firmware update. All the apps, e-books, and other content they’d been downloaded had to be reinstalled. Personal content such as documents and bookmarks were wiped. Some of the purchased content couldn’t be recovered—you can’t download more than the most recent six back-issues of digital magazines.

The problem mainly seems to be hitting Fire HD 8, Fire HD 8.9 and Fire HD 6 models, according to the reports on the Amazon forums. There haven’t been any reports of it hitting non-HD models, such as the $50 basic Fire model—and I just checked mine and it seems to be perfectly fine. It could be that the firmware updates are staggered across different devices and the one for the non-HD Fires hasn’t come out yet. Amazon is reportedly looking into the issue, but it’s unclear if it will be able to do anything to help customers who lost personal content. Fire devices don’t back themselves up to the cloud the way plain-vanilla Android tablets do.

This is sure to provide more ammunition for the folks who take any excuse to remind us all of how evil Amazon is, but this seems like the kind of firmware update glitch that could happen to any big technology company. Computers are complicated devices, and sometimes software conflicts aren’t always obvious until after the fact. It’s just another hazard of life in the modern digital world.