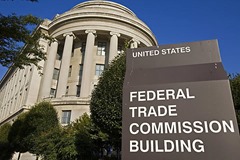 Your e-reader might be trustworthy, but is it anti-trust worthy?

The Federal Trade Commission is conducting an anti-trust probe into Alphabet’s Google’s practices surrounding its Android smartphone and tablet operating system, the Wall Street Journal reports. (Google the headline to read the whole thing; the Wall Street Journal has stopped blocking that workaround.) It began the probe last year after app developers and other tech firms complained. The probe mirrors similar ongoing investigations and lawsuits in Europe (WSJ article; Google headline) and Russia. Potentially unfair practices include requiring Google to be the default search engine on Android devices with access to the Play Store, and bundling other Google services (email, maps, Google Play Books, etc.) as defaults as well.

While Google may very well have to change its licensing practices if it loses those lawsuits, the odds are fairly good that the FTC may decide no charges are warranted in the US, as it did into a recent investigation into Google’s search practices. US anti-trust laws are less stringent than European laws, and will overlook some anticompetitive practices if those practices had legitimate business justifications and improved user experience. This was one of the excuses Apple unsuccessfully tried to trot out in its agency pricing defense.

And, of course, the Wall Street Journal isn’t able to pass up mentioning that its parent company, News Corp, has filed a complaint in Europe against Google unfairly aggregating its content. This is particularly rich given that, as I mentioned above, the Journal tried a brief experiment in not permitting click-through visitors from Google to read content for free—but apparently didn’t find the results warranted making it permanent. If they don’t want their content aggregated, perhaps they should throw that paywall back up. Alternately, if they want to sue Google over it, I’m sure Google will be happy to stop aggregating their content, and what will that do to their traffic?

In any event, it remains to be seen whether Google will also face any charges in the US over bundling its services with Android. As I’ve noted in past stories, the one other big OS bundling lawsuit—the Microsoft affair in the late ‘90s—effectively fizzled out. It’s unclear whether this will do the same.