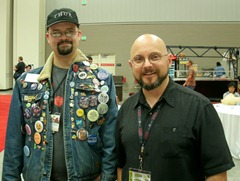 When I was wandering around GenCon, I quite unexpectedly came across a booth where Howard Tayler of the ten-years-old-and-still-going Schlock Mercenary webcomic was selling books, sighing autographs, and personalizing the books he sold with requested character doodles. I hadn’t even known he was going to be there, but naturally, I bought a book and had a doodle made. (Which sort of ties into a point that Michael Stackpole made in the interview with him that I have yet to transcribe—that people don’t buy books at cons as books, they buy them as souvenirs.)

And then I asked Tayler if he wouldn’t mind answering a few quick questions about how he monetized his webcomic, and what his e-book plans might be down the road. He graciously agreed. Here is the transcript:

Me: When you began Schlock Mercenary, what was your plan for monetizing your webcomic? Did you start it with the goal in mind of making a living from it, or was it just a hobby that grew into something more?

Howard: When I first started cartooning, I very quickly decided that I wanted to do this for a career, and began investigating possible business plans, and one that seemed to make the most sense was to find a publisher—build an audience, and then eventually find a publisher and make a living off of books. I thought that would take about ten years. It turned out that I found a publisher after four years, but I wasn’t going to be able to make a living selling books through that publisher because the audience wasn’t large enough. But if I self-published, I could make a living immediately.

And so that’s what we did—we self-published and made a living selling books ourselves. That’s always been the plan. That was ten years ago I first started thinking about that. For the last five years, we’ve operated under the assumption that we would always be able to sell books and other merchandise to Schlock Mercenary fans and we’d be able to make decent enough margins on it that we didn’t need to have half a million people reading the comic. We could get by with a hundred, two hundred thousand people reading the comic and maybe just a few thousand buying merchandise that would support the family.

Me: When you’re selling merchandise at conventions like this, do you make anything off it, or is it more of a break-even thing?

Howard: We make money. We definitely make money. We make enough money to pay for the booth, to pay back ourselves for paying for the booth last year, excuse me next year. We pay the manufacturing costs of the merchandise. We pay all of my travel expenses, you know, all those expenses factor into it. And after all that’s been factored in, we usually at least double our money. Shows where I can’t double my money or shows that are just really really stressful, I stopped doing. San Diego [ComiCon] is one of those shows because San Diego costs easily three times as much to do as any other show I’ve done. But GenCon is one of the more expensive shows I do but it’s still very very popular for us, and so we come.

Me: So, as e-books become more popular and print books start declining, do you think that’s going to affect your revenue model in the future?

Howard: The question is hugely loaded. You are suggesting that print books are going to start declining by virtue of e-books becoming more popular. Those are not cause and effect, and so I’m correcting the question. It is possible that print books will decline; it is possible this will happen as a result of the rise of e-books. What I suspect will happen, however, is that there will always be an audience for the sorts of print that I put together, and that I will continue to be able to make a living off of that. If that’s not the case, I can still make a perfectly good living selling electronic editions of Schlock Mercenary and we’ve already begun prototyping that kind of work.

Me: Even though you’ve still got the webcomic available for free?

Me: So what formats are you going to be doing that in? PDF, EPUB?

Howard: We’ve looked at PDF and it’s only attractive for PCs; it doesn’t work well on any other device. EPUB and Mobi are not ideal because they don’t handle illustrations well, especially not full color. So we’re still prototyping. I’m not going to lock down a format now.

Me: Last question. You have earned a reputation for never missing an update. How do you do that?

Howard: I work several weeks ahead and I prioritize so that during the period in which the buffer is getting smaller, one of my highest priorities is to make sure that the buffer will get larger. It doesn’t matter if I’m in a bad mood, having a bad day, sick, whatever. If the buffer needs to be built, I go and I build it. I cowboy up and I get the job done. Sure, there are days when I don’t want to work, and decide not to. That’s fine, because I’m working several weeks ahead. When there are days when I really feel like working, I will sit down and jam and get a whole bunch of extra work done.

Me: All right, well great. Thanks, I really appreciate you taking the time to speak to me.