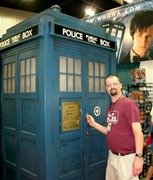 Seriously, I’ve come back from GenCon with recordings of several reviews to transcribe and typed notes on a panel to put up. I hope to begin that process this evening.

Thanks to the writers’ symposium programming track, there were a number of authors available, and I interviewed Michael Stackpole and Greg Stolze, both of whom have done self-e-publishing work that I have covered here. I also interviewed webcomic artist Howard Tayler of the extremely-long-running strip Schlock Mercenary, who self-publishes print collections and is looking at publishing electronic versions somewhere down the road.

On the game industry side, I interviewed Sean Patrick Fannon, RPG publisher relations and marketing director of digital RPG publisher RPGNow; Jason Bulmahn, lead designer of the Pathfinder roleplaying game for Paizo Publishing; and Phil Reed, chief operating officer for Steve Jackson Games. They all had plenty of fascinating things to say, and I look forward to sharing them with you.

I spent most of my time at the convention wandering the exhibitors’ room, checking out the wares on offer. There were hundreds of booths, and I know I didn’t manage to see everything on offer, but I saw a lot—especially because I was doing a scavenger hunt put on by Cheese Weasel Logistics that involved visiting specific booths, participating in demos or listening to their spiel, and getting a card punched.

There weren’t just game publishers there, or companies that sold dice and miniatures. There were anime companies, at least three different special-effect-photography manipulators, sewing and crafts booths, and so on. The second-hand bookstore chain Half Price Books even had a stand there. Even if your interest in gaming is only moderate, you would still find enough to catch your interest. (Indeed, you could spend all day just looking at all the people in fascinating costumes.)

I also noticed an interesting trend among a lot of game companies: if you bought a physical copy of the RPG, they would give you the electronic version free. A few were doing this the last time I was there several years ago, but the practice seems to have spread since then.

Readers of prose novels have been wanting this sort of bundling for some time, but seems unlikely ever to happen as fixated as prose publishers are on being paid for each and every copy. (Fictionwise’s Pendergrast brothers famously explained that publishers insisted on each DRMed copy being sold separately in their stores—if you bought an eReader version and wanted Mobipocket also, you had to buy even the Mobipocket version separately.)

The game-industry folks I talked to, including those I interviewed above but also people such as Ken Hite of Pelgrane Press, tended to see a freely-bundled PDF as a way to make their print books more attractive to game consumers. Since it had no marginal cost to give a copy out, they didn’t see it as costing anything if it drove a sale of a paper book which did have marginal cost. Piracy was not as much of a concern—while companies would act to stamp out commercial piracy when they found it, they tended to consider most noncommercial theft not to be lost sales that they would otherwise have had, and found that, for now, most gamers seem to want a physical book as well for easier use at the gaming table.

The interviews will go into more detail, and I hope to begin posting those very soon. I may also make them available in podcast form for direct listening.