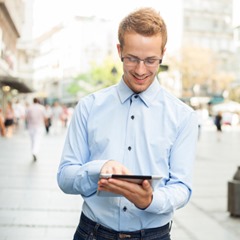 What do you know? It turns out tablets were made for me!

Or my generation, anyway. Media Life Magazine reports on a study showing that Generation X—defined as 35-to-44-year-olds—are the heaviest tablet users. Well, actually it’s Nielsen statistics showing that Generation X folks watch the most TV on them, which seems like just a bit of a generalization—though it does back that up with other statistics. Gen-Xers watch nearly four hours a week, while both kids and younger adults watch about two and a half and older folks watch about three.

Nearly half of 35-44s say they use tablets in a typical week, up from 38 percent last year. The most popular activity is surfing the web and using apps, but many in the demo also listen to audio, watch video and use the tablet for social networking.

Millennials are less likely to use their tablets for audio or social media, but equally likely to watch video.

The article posits that the reasons aren’t economic, as cheap as tablets are these days, but more to do with smartphones being so ubiquitous and well-adapted to younger eyes.

The funny thing here is that there’s no mention at all of reading e-books anywhere in the article. It’s all about watching video, web browsing (does anyone even say “surfing” anymore?) and social networks. Maybe nobody actually reads anymore? It would be interesting to see what those stats look like.

But given we’ve already heard Kobo’s CEO Michael Tamblyn talking about how people have more time to read as they get older, my suspicion would be that the statistics might look about the same—not so much for younger folks preferring to read on smartphones, but for younger folks not doing as much reading at all. Meanwhile, my weakening eyes are grateful for a big screen the size of my iPad Mini 2, Nexus 7, or 7” Fire because I can make the font nice and big but still see a decent number of words on it. For that matter, that’s why I like my big-screened Nexus 6 smartphone, too, though I don’t read as much on it.

In any event, it’s nice to know that e-books will continue to be there for me the older I get. I may need to make the font bigger and bigger, but I’ll keep being able to read it just fine.