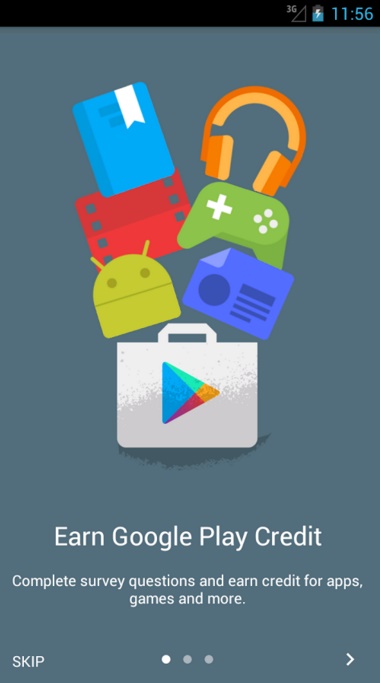 Here’s another way to get free ebooks instead of waiting for Kindle Store giveaways – if you’re an Android user, that is. Google Opinion Rewards, available as an app on the Google Play Store “created by Google Consumer Surveys,” serves you up various market research mini-surveys and polls – and rewards you with Google Play Store credits in returns for completing them.

According to the app blurb, Google Opinion Rewards will “send you surveys around once a week, although it may be more or less frequent. You’ll get a notification on your phone when a short and relevant survey is ready for you, and can receive up to $1.00 in Play credits for completing it. Questions can range from, ‘Which logo is best?’ and ‘Which promotion is most compelling?’ to ‘When do you plan on traveling next?'”

Inevitably, there are some drawbacks. If you want to use the system to get ebooks, for one thing, you have to be a Google Play Books user – though Google makes it very clear that you can use the rewards for ebooks, even placing the Google Play Books icon at the top of the introductory splash screen. You have to be in the core (chiefly U.S. or Western European) target markets for it to be any use. Some of the user reviews complain that the app is spyware, to target you for Google ads. Others complain that surveys drop off quickly, or never amount to much in the way of rewards. And of course, some may object to the whole approach on principle as another attempt to pry into their privacy. But for those Android users who don’t, here’s a way to stock up on yet more ebooks, as if your preferred e-reading devices weren’t bulging enough already.