– we construct our technologies, and our technologies construct us and our times. our times make us, we make our machines, our machines make our times. we become the objects we look upon but they become what we make of them – sherry turkle – life on the screen –
Tactus Technology have announced a new touchscreen design: a smooth touchscreen (like the iPhone) which can rapidly switch to a raised-buttoned interface for those moments where haptic feedback might be of use (like texting or writing an email). Here’s the demo video:

As someone who wields a Blackberry for the deluge of work email (and often texts and emails by touch while walking around campus), but covets the large screen of the iPhone for web surfing, this seems like a huge step forward (and it should be in devices by the second half of 2013 – there’s a nice write up over at The Digital Reader). And it might have some important advantages.
On the bus into town yesterday two young children (under 12) were playing with their phones. One had a basic Nokia, the other had an iPhone, and they ended up taking it in turns to play a racing game on that device. They were meeting someone at the other end of their journey, and the mother of the boy with the iPhone asked him to text to say that they were nearly there. He shut his game down with a press of the “home” button (the only physical button the iPhone has on its face) and then tried to send his text. And he really struggled; the dexterity required to tap out a message on the flat screen really wasn’t there. His friend ended up sending the text on his Nokia after the boy had made a final significant error (I think he’d accidentally inserted a long auto-correct word and then spotted a few other mistakes in a very short message). The poor guy was really frustrated, and maybe I’m finally getting old, but I did start to wonder what the effects on fine motor control might be if children grow up with their main sources of entertainment and distance communication being various flat, super-smooth pieces of glass.
I think I’m naturally pretty clumsy, 6′ 3″ and not very aware of how much space I take up, but skateboarding, playing guitar, working out, playing too much Xbox, and building things (miniatures, garden landscaping, DIY) has given me a better sense of my body schema, from fingertip lightness, to reach, strength, and flexibility, to body balance – I’ve trained myself to be a bit less of a klutz (an interesting word in the context, linked to clot/clod via a German root (as well as the Yiddishklots), being stuck together, lumped, a lump, rather than something free and flexibly linked). Not everyone plays an instrument or builds things for pleasure, but I’d guess most children, at least those in post-industrial economies or otherwise affluent families, play some kind of videogame or use a computer on a fairly regular basis; this means that there’s at least some tactile interface during play over increasingly less active formative years. So it got kind of worrying when even those guarantors of dexterous development suddenly became non-existent (in the case of the Wii, the Xbox Kinect, and Playstation Move) or smoothed over, tiny points of meaning on a flat plane easily missed or occluded by an uncertain hand or finger unable even to rely on the hunt-and-peck responsiveness of a QWERTY keyboard.
So I’d love to see at least some variation of Tactus Technology’s design in digital devices aimed at children, including e-readers (which have also begun to shed their buttons with the Nook and the Kindles Fire and Touch), and I know that if the iPhone 6 had something like this built-in then I couldn’t resist it for tapping out an email on the move after browsing on a decent flat screen.

And there are probably a lot more possibilities for this technology in the kinds of interface it opens, and reopens to users. I imagine playing games with a hybrid of buttons and touch could be fun, and if the granularity of the technology improves then who knows what kind of surfaces it might be able to imitate? An iPad game for young children where you could feel the scales of the dinosaur, the frog’s squidgy eyes, the octopus’ tentacle sucker-cups, the keyhole to unlock the treasure, would be pretty cool. And interfaces for the visually impaired (indicator buttons rising and falling as the device’s GPRS senses which way you’re facing for instance) might offer new ways-in for users currently denied even basic access to smartphones and tablets.

To my mind, technology which remembers we have bodies, and that we learn and have learnt with our bodies over time, they’re the ones that are built to last.

[Dr. Matt Hayler is Lecturer (Education and Scholarship) in Digital Humanities, Cyberculture, and Critical Theory University of Exeter and blogs at 40h4-words not found] 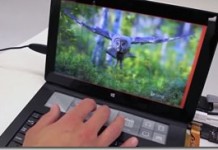 The Pen Cap Stylus – a step forward in pen-ile versatility

Elliptic Labs announces the mother of all screen swipes

My cheap stylus problem might finally have been solved for good