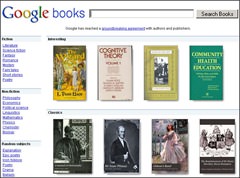 What ever happened to Google Books? Columbia law professor Tim Wu wonders about that in this piece in the New Yorker. Wu notes that the Google book-scanning effort started with “a plan to scan all of the world’s books and make them available to the public online” but where is that plan now?

Wu would have it that it died when the settlement with the Authors Guild fizzled. That settlement would have allowed Google to set up as the world’s biggest e-book store, selling literally any e-book and the money going to that book’s publisher, or into escrow against future claims if the work was orphan. Judge Chin rejected that settlement in March, 2011 as being too far-reaching.

But is that really right? Not so fast. First of all, Wu seems to misremember the stated purpose of Google Books. Google never intended to make the books available to the public. Google planned to make them searchable by the public. It’s right there in the New Yorker article from 2007 Wu links to in support of his claims:

Google intends to scan every book ever published, and to make the full texts searchable, in the same way that Web sites can be searched on the company’s engine at google.com. At the books site, which is up and running in a beta (or testing) version, at books.google.com, you can enter a word or phrase—say, Ahab and whale—and the search returns a list of works in which the terms appear, in this case nearly eight hundred titles, including numerous editions of Herman Melville’s novel. Clicking on “Moby-Dick, or The Whale” calls up Chapter 28, in which Ahab is introduced. You can scroll through the chapter, search for other terms that appear in the book, and compare it with other editions. Google won’t say how many books are in its database, but the site’s value as a research tool is apparent; on it you can find a history of Urdu newspapers, an 1892 edition of Jane Austen’s letters, several guides to writing haiku, and a Harvard alumni directory from 1919.

The article even explains that Google plans to use those snippets to link to publisher and bookstore sites so people can purchase the whole book themselves from them—not sell it themselves. Google wasn’t an e-book sales company, it was a search company. Why would it want to do anything else with them?

(Yes, Google sells e-books now, but that came later. Anyway, Google Play e-books come from the same source as any other e-book store—Google gets the publisher-approved e-book files from the publisher, not from Google Book scans.)

The idea of making the books available to the public came from the Authors Guild when it sued them. Apparently they were so hung up on the idea of those books existing in digital form that they couldn’t imagine them not being made available in their entirety for money. Chekhov’s gun was on the mantelpiece; it must be fired!

But the thing is, despite that it calls itself the “Authors Guild,” the Guild does not, nor can it claim to, represent the interests of all authors everywhere. Indeed, subsequent court decisions have held that “all authors everywhere” is simply too broad a class to take part in a class action lawsuit. Authors like Ursula K. LeGuin were right to object.

I honestly don’t think Google making the books available for sale was ever really in the cards. The orphan works problem is simply too contentious an issue, and since you can’t have “all authors everywhere” as a party to a lawsuit, it was never going to be resolved by judicial fiat in any event.

Although some would say that leaving it to Congress is a recipe for it never actually getting done, the laws of the land don’t leave any other easy option. The orphan works issue isn’t going to be resolved by twisting some existing law to fit; it’s going to need a new one, and that’s going to take Congress. (Assuming that the Trans-Pacific Partnership doesn’t short-circuit the attempt.)

In the past few years, the Authors Guild has usefully proposed a solution known as an “extended collective licensing” system. Using a complex mechanism, it would allow the owners of scanned, out-of-print libraries, such as Google or actual non-profits like the Hathitrust library, to make a limited set of them available with payouts to authors. The United States Copyright Office supports this plan. I have a simpler suggestion, nicknamed the Big Bang license. Congress should allow anyone with a scanned library to pay some price—say, a hundred and twenty-five million dollars—to gain a license, subject to any opt-outs, allowing them to make those scanned prints available to institutional or individual subscribers. That money would be divided equally among all the rights holders who came forward to claim it in a three-year window—split fifty-fifty between authors an publishers. It is, admittedly, a crude, one-time solution to the problem, but it would do the job, and it might just mean that the world would gain access to the first real online library within this lifetime.

And even Wu admits that figuring out how to handle the issue now is within Congress’s remit.

But I say that, going on the basis of Google’s original plans for the project, Google Books is anything but a failure. It’s a smashing success.

So, what ever happened to Google Books? Both it and its Hathitrust adjunct project were ruled to be covered by fair use in their efforts to scan and index the texts of libraries’ worth of print books. (The Hathitrust ruling held up on appeal. The Google Books appeal is still being considered by the same court; oral arguments were held in December, 2014 but apparently no ruling has come down yet.)

Consequently, those books are fully searchable and are an invaluable scholastic resource. Millions of people can now find exactly what books have the information they need in ways no paper or digital card catalog could ever hope to match. Before Google’s scanning project, who could have imagined there would ever be a way to search through all the paper contents of a library? It sounds like something out of science fiction. (Rainbows End, perhaps?) But science fiction is only science fiction until it becomes science fact.

Even I have been a beneficiary of Google Books. One day when I was googling for information about Arsène Lupin’s claim to have introduced jujitsu to Paris, I came across a citation in a book that filled in some of the historical context around French “Apache” street gangs of the day and the self-defense fad that swept Europe around that time. I would never have run across that material otherwise.

So, that’s what ever happened to Google Books: It succeeded.