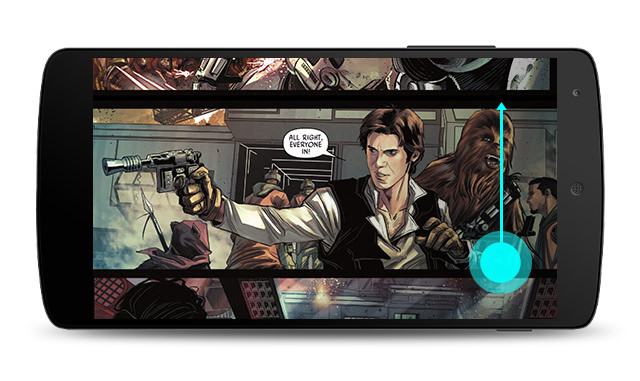 The Official Android Blogspot has announced – in suitably comic-flavored language – that “Google Play Books is getting an upgrade specifically designed for comic book fans, making it easier to read your favorite comics on your phone or tablet.” According to Google, “reading a comic book is all about following the story and enjoying the art, dialogue and pace the way you want. But navigating a comic can be tricky on a small phone or tablet screen. So, we’re introducing a new vertical scrolling experience for comics in landscape mode. Flip your device on its side and you can easily scroll through the story with quick vertical swipes.”

As you can see from the screenshot above, taken from “Star Wars: Journey to Star Wars: The Force Awakens – Shattered Empire,” this looks like it might be a pretty immersive winner. Those who prefer to see the entire page of a comic book at one glance, to see how all the panels fit together, may not be so thrilled, but presumably that old style layout is still available in portrait view. Furthermore, this isn’t confined to Android alone. The few Google Play Books users on iOS will get the same new feature soon after.

Not content with the raw functionality upgrade, Google Play Books is also “offering a new comics destination and a bunch of beautifully curated series pages on the Google Play Store that organize volumes, issues and other editions of the top comic series. You’ll also find new personalized recommendations for similar series to help you discover new stories and characters.” There is also a widely publicized launch offer for the new comics platform involving 44 giveaway titles, the first issues in many very popular series. That said, the link to Google Play Books absolutely isn’t working for me, but perhaps this is due to my location in Hungary – or maybe it’s a glitch that Google will fix later.

As this indicates, the new update may not be available right this minute. But according to Google, “these experiences will roll out to Android users in the next few days (with iOS soon to follow) in the US, Canada, Australia, the UK, India, Singapore, Ireland, New Zealand and South Africa. Now stop reading here, and go connect with the canon!”

Sounds like a hard invitation for any comics buff to refuse. Kapow!