The news that Google has quietly been the owner for a year now of smartwatch startup WIMM Labs confirms the prospects for a new generation of smart wrist devices that I highlighted earlier in TeleRead.

And with Samsung’s Galaxy Gear wrist device now only days away from launch, it looks like this new generation will be rolling out with at least some of the devices running varieties of Android, with access—at least in principle—to the library of e-reader apps on the Google Play Store.

WIMM Labs already has one device, the WIMM One, based on Android. And although this unit hardly challenges the limits of the possible, based on what we know, the reports that WIMM’s developers have stayed on board through the transition to Google ownership hint that the new parent may be looking to take future devices considerably further. 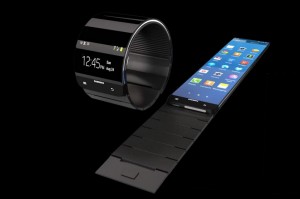 Google Glass already provides a test bed for a whole series of ultra-mobile applications, and it’s not hard to envisage Google migrating some of these onto (cheaper, less obtrusive) wrist devices.

Motorola and Sony already have Android-based smartwatches in production, so Google is not exactly moving into uncharted territory. And the statements and leaked menu screenshots of the Galaxy Gear (pictured at right) point to a very interesting gadget, not least in having NFC for synchronization with smartphones. And if the iWatch is really delayed until 2014 as some reports suggest, then Android devices could end up dominating the category.

That said, the question remains whether anyone will ever read on such small devices. I think they will. The form factor may not be ideal, but people have produced hacks and apps for every size of phone and device over the years. I don’t expect smartwatches will be any different.