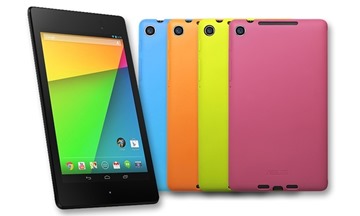 If you’re looking for a reasonably-priced e-book reader and movie viewer, here’s a deal on the Asus-made 2013 Nexus 7 tablet that might be right up your alley. Groupon has the 16 GB version of the 7” Android tablet on sale for $110 with free shipping for a little over three and a half more days. The tablet even includes a flip-open travel case in your choice of orange or pink. (The pictures show other colors, too, but apparently they aren’t available.) Groupon offered the same tablet, sans case, for $150 in December 2014.

When it was made, the Nexus 7 was Google’s reference design—the gold standard for Android tablets. It might be getting a little long in the tooth at this point, and indications are that Marshmallow will probably be the last new version of Android it gets. However, it does run Marshmallow pretty well and it’s still a decent contender for an Android tablet, especially at that price. Its 1920×1200 323 ppi display resolution will display e-books in about the same clarity as an e-ink Kindle, not to mention show streaming video in full high-definition quality. It plays video games well, too.

I’ve enjoyed my 32 GB Nexus 7 since I picked it up for $170 at a store closing a couple of years ago. A 16 GB version might not have as much on-board storage, but it’s just as good in every other way that counts. The lack of SD card slots might be a problem, but you can deal with that with a dual-plug USB drive easily enough.

It’s a heck of a deal, and the tablets are getting hard to find brand new anywhere else. If you could use a new tablet, or a decent spare, it might be worth checking out. Groupon offers a few other deals on inexpensive Android tablets, too, but I don’t think any of them is as big a bargain as this one (with the possible exception of Asus’s 16 GB MeMo pad, its own-branded 2012 Nexus 7 equivalent, for $90).