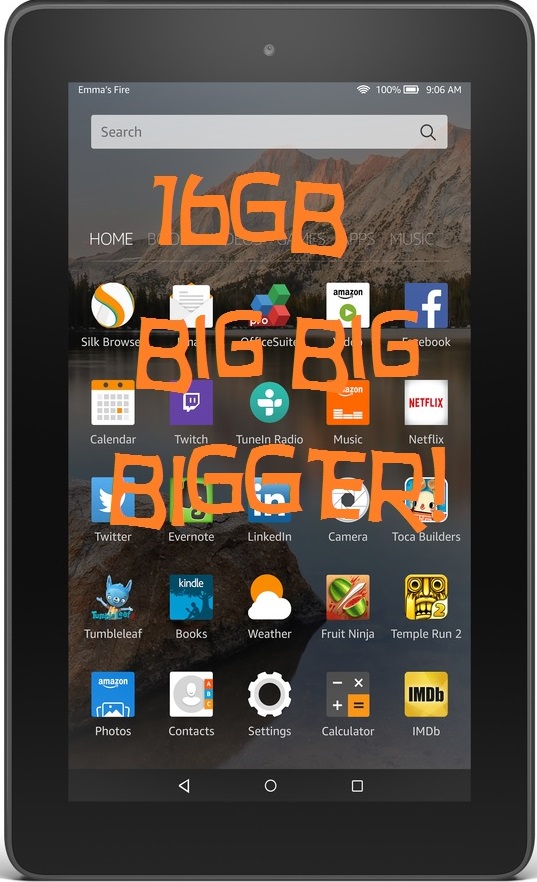 With all the excitement over Amazon’s pending new Kindle, you may not have noticed that Amazon has also released a new, 16GB version of its $50 7″ Fire. This isn’t, alas, still $50 – instead, the price has been bumped up to $69.99. Specs otherwise appear to be identical. All the same, some Amazon Fire fans out there will surely want to consider this more spacious option. Indeed, right now the 16GB Fire is #1 in Amazon’s Hot New Releases rankings for Computers & Accessories.

But hold on – doesn’t this defeat the point of the original Fire’s micro SD expansion slot? I mean, why focus so much on internal memory when you can expand your storage by plugging in a memory card? As it happens, it’s not that simple. The Amazon Fire’s memory management and limited access to the micro SD storage are part and parcel of several memory issues which mean that extra internal storage really is a helpful thing. This may be no credit to Amazon, which could have put a little more care into internal memory allocation. On the other hand, I’ve had exactly the same problem with other Android devices, and the Fire was supposed to be a cheap and cheerful device in the first place.

So, if you’re looking for more storage for your Kindle titles and other ebooks, as well as e-reading and other apps, and don’t mind the extra cost, the bigger Fire could be the device for you. On the other hand, many users may prefer a different and more highly specced device from another manufacturer in this price range. Either way, I doubt the new device will make any difference to the Fire’s meltdown of the lower end of the tablet market.