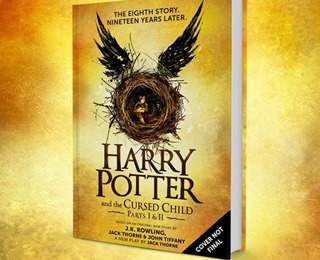 If you were concerned you might not get to find out “what happens next” in the new Harry Potter stage play, by dint of not being in London to see it, worry not. Today a Pottermore press release landed in my mailbox informing me that a “Special Rehearsal Edition” of the Harry Potter and the Cursed Child script will be published in both print and e-book formats one minute after midnight on July 31, 2016, the day after the play opens in London. The e-book version will cost £9.99 in the UK from Little, Brown; $14.99 in the US from Scholastic.

The version of the script will be the preliminary one that has been hashed out through a few weeks before the play’s first performance; it may undergo further refinement and development during the rehearsal and performance process. As such, the “Special Rehearsal Edition” will only be available for a limited time, after which it will be replaced by the “Definitive Collector’s Edition” sometime later (so those ravening Harry Potter fans will have something else to spend their money on then).

I’ll admit, I would have hoped Rowling would have gone ahead and done a full-fledged novelization of the script, for the sake of people who would prefer to read it in prose rather than stage direction, but at least this is better than nothing. And who knows? Maybe she could do such a thing later on. If she doesn’t, I’m sure there are plenty of fanfic authors who will be happy to do up their versions.

If you want to know what the story’s about, here’s the blurb from said press release:

It was always difficult being Harry Potter and it isn’t much easier now that he is an overworked employee of the Ministry of Magic, a husband, and father of three school-age children.

While Harry grapples with a past that refuses to stay where it belongs, his youngest son Albus must struggle with the weight of a family legacy he never wanted. As past and present fuse ominously, both father and son learn the uncomfortable truth: sometimes darkness comes from unexpected places.

This looks like it has the potential to be interesting. We’ll have to see.