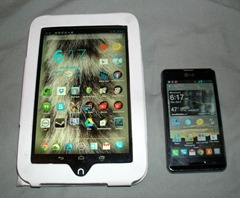 I had experimented with Android before that, of course. I had an inexpensive Zeepad for several months before breaking the screen. It was almost unusably slow, but intriguing enough that I wanted to try a real Android experience. So, as chronicled here already, I picked up a cheap refurbished Nook HD and put CyanogenMod on it, and discovered it was lots of fun. With better resolution than the first-gen Nexus 7 and a more than decent processor, it does pretty much everything I want, including playing Plants vs. Zombies 2 with no noticeable lag.

But I still didn’t have anything pocket-sized. So finally I took the plunge and settled on a $150 Virgin Mobile pay-as-you-go LG Optimus F3 smartphone running Android 4.1.2. It comes with a $35 per month plan providing 300 minutes and unlimited (albeit untetherable and throttled after several gigabytes) data, which meets my needs perfectly. It’s more expensive than the cheap Tracfone cards I was buying, but on the other hand it’s more useful as a single device than the Tracfone and iPod Touch were put together.

(The only major problem with the phone plan is that Virgin Mobile is on the Sprint network, so my phone gets no signal very far away from cities or major highways—at my parents’ home, for example. In retrospect, perhaps I should have seen if Verizon had a decent pay-as-you-go plan with a cheap Android smartphone. But on the bright side, I’m not under contract, so I could buy another phone, sell this one, and port my number to another carrier at any time. And I’m not too likely to be away from cities or major highways in the near future, anyway.)

Having an Android phone has been amazing, in ways that I would not have expected. One of the simplest changes but the most striking is the ability to install customized keyboards. Apple does not allow this on its devices, meaning I was stuck with plinking in one letter at a time on my iPod Touch. But I can stick Swype into my Android devices (both phone and Nook HD) and swipe out words much more quickly.

To my surprise, thanks to Swype I can actually write pretty quickly on my phone, to the point where I could compose a several-paragraph email in just a minute or two. Hence, I’ve gone from having a mostly one-way, short-messages-only Internet device in my pocket to a fully two-way communication device.

Another great thing about Android is that there is a global sharing API. Practically any app that can share content (to social networks, email, instant message, etc.) will always share it the same way, consistently, across the entire device. If you can share from one app to Facebook, you can share from practically all of them to Facebook, and it’s done in exactly the same way. You don’t have to rely on the developer of a particular app coding it in.

And thanks to the 32 GB micro SD card I bought when I bought the phone, I can carry substantially more music with me than my 8 GB iPod Touch allowed. The one drawback is that if I turn the phone off or restart it, when next I turn it on the phone has to spend ten minutes or so re-indexing the SD card before it can play music or store photos there again. The phone also supports streaming music from the Google Play cloud locker or the Pandora app, of course.

Having a camera capable of HDR pictures and GPS are also nice, though admittedly those would have come with practically any smartphone these days whether Android or iOS. I can play Ingress a lot better than on the wi-fi-location-only Nook tablet, and check in with FourSquare and Yelp a lot more easily too. And thanks to all the messaging apps available on Android, I can receive and send all my IMs that way.

The Optimus F3 isn’t perfect, however. It has a couple of major drawbacks which probably come down to its relative cheapness. One is that the battery life is fairly short. When I was working for TeleTech, inside a building with poor cell reception, I couldn’t even keep the phone on for the whole 8 hour shift without it running entirely out of power from trying to keep a signal up. I ended up having to use add-on battery packs like the Evolution USB power bank to eke out extended service.

The other drawback is that it only has 1.5 GB of onboard memory for apps. Some devices can put apps on the external card, but apparently the inability to do that is one of the restrictions of this phone, and I can’t change it without hacking it (which would probably completely wipe the phone). Some apps, like Google Play Music, want to put big caches of data in that space. Even so, I’m by and large able to get by. Disabling unwanted built-in applications helped, and there are a number of other apps and tricks you can use to reduce wasted space. (I also found that my contact list was taking up 170 megabytes for some reason. Deleting and resyncing my contacts brought it down to a more manageable 7 megabytes.)

There are only a couple of applications I miss. Some of them are games that really don’t matter very much; one is the “Easy Relax Ultimate” binaural beats/white noise app I still use on my iPad to go to sleep every night. But that’s about the only thing I still use either my iPad or my iPod Touch for. Apart from my new phone being such a perfect replacement for my iPod Touch, my Nook HD (and the cheap Bluetooth keyboard I got from Amazon) has completely replaced my iPad in day to day use. It runs more recent software, but more importantly it’s lighter and smaller so it’s easier to take with me everywhere.

The funny thing is, I don’t really use the phone or tablet all that much for e-reading. At least, not e-reading books. I do read my RSS feeds with the Press reader, however. I find it greatly makes up for the annoying loss of Reeder thanks to a combination of Google discontinuing its own RSS service and the new Reeder app coming out for versions of iOS I can’t run. And it works great for Flipboard, too.

In the end, I don’t really miss having an Android iPod Touch equivalent now that I bit the bullet and upgraded to an actual smartphone. Though I do think such a smartphone could well work as an iPod Touch equivalent, unactivated and used wi-fi only. It would certainly be a more economical alternative, at $150 + $20 for the 32 GB SD card.

I think one of the great strengths of Android is that—unlike Apple’s iPad or Microsoft’s Surface—it has devices available at a wide range of price points. If you want something cheap, you could get a Zeepad or similar Chinese knockoff, or a refurbished Nook HD. If you’ve got the money to spend, you could get a Google Nexus or Transformer or Galaxy Tab. Any apps you buy for one device will still be around and available for you to use on the next one you get.