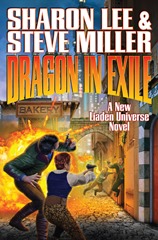 Today I had my attention drawn to a puzzling conundrum I hadn’t considered before. But it’s a very interesting question.

When a book is available in multiple formats, Amazon lists several of those formats in boxes at the top of the page—from 2 to 5 or more, depending on how much space you have in your browser window. The question is—how does Amazon decide which formats to show when you only have space for two or three? And why do different people get different selections?

On my Facebook feed, Sharon Lee remarked on a strange bit of behavior by Amazon. Last year’s Liaden book, Dragon in Exile, just hit mass-market paperback, but both she and a reader found that if she went to the Amazon page for it, the MMPB format didn’t show up in the three boxed formats listed at the top of the page. It just listed the Kindle, hardcover, and Audible audiobook editions. To view MMPB, it was necessary to click on the small print “See all 5 formats and editions” link above the five boxed listings.

Curious, I went to check this out—but when I pulled up the Amazon page, I saw all five formats listed right there.

Sharon Lee suggested that this might be a result of being an Amazon Prime member—but I signed out of Amazon and refreshed, and Amazon showed me the same five listings whether I was logged in or not. Then I tried narrowing the browser window, and sure enough, the narrower it was, the fewer formats showed up in boxes—but even when I got down to just two formats, even when I was logged out, one of them was Kindle and the other was Mass Market Paperback. Even when I tried it via the Rabb.it virtualized web browser, from which I never had been logged into Amazon, I still got Kindle and MMPB as my two boxed formats.

I wondered if it might have been that Amazon showed whichever formats were selling best, and since Sharon Lee had last checked, MMPB had gotten a bunch of orders from all the people who’d been waiting for that format—but when she checked again it still didn’t show up, unless she made her web browsing font small enough that all five boxes showed up. She was still presented with Kindle, hardcover, and Audible choices.

Lee noted that she’d never bought an Audible book, though she has been buying e-books lately unless she can get an actual book from a vender at a convention. She does buy MMPBs from Amazon, but not hardcovers at the moment, which is why she finds it so puzzling Amazon offers her the hardcover choice first. But on logging out, she was shown three different choices: Kindle, hardcover, and MMPB. (Which were the same ones I saw when logged out and screen size was such I only got three boxes.) So it clearly must be something associated with her account somehow. But given her purchase history, it’s puzzling she got Audible instead of MMPB. And what ever it is isn’t associated with my account.

The one thing I do know is that Amazon is crazy about statistics and number-crunching, while at the same time being completely silent about how it uses those numbers. Perhaps other factors than just what purchases one makes on one’s account figure into it. Maybe Sharon Lee lives in an area that buys a lot of audiobooks. Maybe Amazon has found people in her demographic tend to buy audiobooks more often than MMPBs, so offers that as a choice instead even though she personally hasn’t ever bought one—there’s always a first time.

I suppose we’ll never know. But it’s still fascinating to consider all the little different ways Amazon tries to influence our purchasing decisions that we might never be aware of unless we actually go looking for them. Even something as seemingly trivial as deciding which three out of five formats to show someone when they can’t view all of them can have enough of an impact on purchasing decisions to make it worthwhile for Amazon to try it. (Or, when you get right down to it, which two out of four formats it decides to show, because Amazon is always going to push the Kindle format when available simply because it’s so much less expensive for Amazon to sell one of those than to ship a physical book.)

Another interesting thing about Amazon and its number-crunching is that, over the course of the time I spent writing this article, the mass market paperback and Kindle price for the book jumped from $6.09 to $6.18. Baen obviously isn’t on agency pricing, so Amazon’s free to adjust it how they like. Either way, that’s certainly less than Baen’s price for the e-book at the moment. Baen still shows the price at $9.99. Generally Baen drops the price to $6.99 on MMPB release (so expect it to fall within a few days). But $6.18 is certainly less than even $6.99!