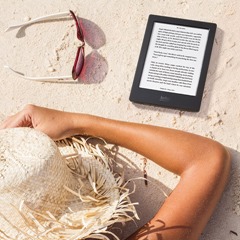 The word from E Ink is apparently, “Very safe.” The company brags about “Comprehensive environmental robustness based on multi-year investment in sealant methods, moisture protection, UV block and mechanical protection.”

So is it that way in real life? A MobileRead post raises questions, which I invite TeleRead community members to answer, based on their own experiences. The headline is Aura HD affected by moisture/humidity, HELP! Of course, in many situations we could also talking about parts of the Kobo beyond the screen itself.

Moisture isn’t the only car-related issue. Despite reassurance from Kobo, how about possible damage from prolonged exposure to the sun? And in this regard and others, how do E Ink machines compare to LCD devices such as cell phones (apparently certain makers of cell phones want to ballyhoo their products as sun-friendly)?

As for countermeasures, at least against moisture, if that’s an issue, waterproof cases such as the Redpepper for certain Paperwhite devices would be one possible solution.

Or you can just go out and buy a waterproof Kobo H20 like the one shown in the image above. Even then, however, be careful.  The H2O users manual warns about salt water, chlorinated water and soap water, for example—apparently more of a threat than mere moisture by itself. Of course, if the picture is on the mark, the H2O at least can fare well in the sun.

In a car, you can also consider the obvious and put your Kobo, Kindle or other in a shady location of the automobile which isn’t as exposed and isn’t as likely as others to heat up.

All this aside, don’t forget another problem of goodies left in the car or on the beach. My niece was lazing on a sand, only to get her Kindle stolen, then filled with foreign-language publications.

Related: Exactly how waterproof is the Kobo H2O reader? Find out before you hit the beach.