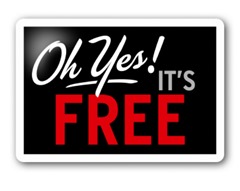 Some authors like to offer free e-books to build exposure. For example, offering the first book in a series for free could hook readers and entice them to pay money for later books. But Amazon doesn’t do free, except in very limited circumstances. (People who publish with Amazon can give their book away for free so many days per month, and that’s it.)

But it turns out there’s a convenient loophole you can exploit—the way Amazon does price-matching. I had been aware of this for a while, as a theoretical idea, but I just happened upon a post by J.A. Konrath who did so and found that it worked.

Konrath had noted a number of other self-publishing authors were offering bibliographies as 99-cent e-books, as a way to promote their titles and reach people who wanted a convenient guide to reading order in e-book format. Konrath felt he could do better than 99 cents, so he published his bibliography free to various other platforms that would allow it, and to Amazon for as low a price as it would permit—and then, once a day, he used Amazon’s “Tell us about a lower price” link to “tattle” on himself that the book was being offered elsewhere for free. It apparently worked: six days later, his e-bibliography was free on Amazon.

He also happened to mention a convenient service called Booklinker.net, that bloggers, authors, and others can use for an e-book being sold on Amazon that will automatically redirect those who click on it to their own local region’s Amazon store.

So, even though Amazon doesn’t permit you to set a price of “free,” if you do want to give your e-book away on Amazon, it seems that all you have to do is give it away somewhere else and let Amazon know, and it will follow suit. Nonetheless, I wouldn’t use this technique unless you’re committed to making your book perma-free—other authors have noted that it can be tricky to get Amazon to stop matching a price even after it’s been changed elsewhere.