Over on the BBC website, British Man Booker Prize-winning writer Howard Jacobson has recorded and penned a long, personal, and impassioned paean to his library. This dates back to age 12, the fruit of a lifetime’s habit of book collecting. Damp second-hand books filled Jacobson’s childhood home. “Some people love the smell of wet leaves in an autumn garden. The smell of rotting bindings and suppurating pages – slightly foxed, I called them – was not much different,” Jacobson writes. “I have called my zeal for laying hold of second-hand books ‘collecting’, but that’s too grand a word for what I did. Collecting suggests knowledge, purpose, selection, even system. A collector knows what he’s collecting. I just wanted to own all the books in the world that could be called literature without yet having any distinct idea what literature was.”

A laudable ambition. Following it over a lifetime has left Jacobson with the most beloved, cherished, pampered white elephant of personal libraries. “What compounds my exasperation is the thought of the energy I have expended carting this monstrous collection of damp books around the country and indeed the world – for they have twice been to Australia and back – pulling muscles, ruining my back, trying the patience of friends who have stored or stood guard over them, and spending small fortunes not only on chiropractors and physiotherapists but on cardboard boxes, transportation, shelving and yes, divorce proceedings.” Strikes me, all the same, that there are worse things in the world to get divorced over than books.

My problem with Jacobson’s veneration of books is what’s tacked on at the end. He writes: “Technology cannot replace a book. No matter that I can quickly find a digital version of a novel I’m looking for, I still fly into a rage when I discover I no longer have it, and remember who borrowed and didn’t return it, five, 10, 20 years ago. For it is irreplaceable. It has my scribblings in it. The marginal expletives. The turned-down pages. The bus ticket or taxi receipt or even billet doux employed as a bookmark – not just the marginalia of an intellectual life but the detritus of the heart.” All well and good, and very true. But then he adds: “And that you don’t get on a Kindle, or a free e-book courtesy of Project Gutenberg. What you can’t bend or throw or write on isn’t, in the end, literature.”

Well isn’t it? So were all those painstaking transcribers and distributed proofreaders who spent many, many hours transferring the corpus of the human mind into Gutenberg’s archive wasting their time? Because at the end, the marginal scribbles and personal associations are more important than the author’s own words, the fruit of their writerly life?

It’s a cheap no-brain crack to point out that Jacobson could have saved loads on chiropractic bills by using a Kindle. And he acknowledges that many of the books on his shelves are unread. “The novels by George Manville Fenn I once thought I would read in my serene old age I now acknowledge that I never will, not least as old age might have arrived but serenity hasn’t.” And I concur with him that books should still be saved even when they’re unread. “A dead book is still a book.” The recovery of the papyrus scrolls of Herculaneum is only the most extreme demo of exactly why you don’t burn books. After all, if Vesuvius can’t destroy knowledge, why should we try?

That said, though, why use one form of preserving knowledge and literature as a stick to beat another? Why get so fetishistic about the medium at the expense of the message? Why dismiss ebooks in such a spasm of casual, offhand, kneejerk snark? Could someone be getting just a wee bit defensive-aggressive here?

And fine, so am I. I’ve got a personal stake in this. I write onscreen, like so many other working writers nowadays. I read onscreen likewise. From Gutenberg freebie classics to the latest digital review copies, the words going into my head come from electrons, not ink. The other words that they inspire, that then come out, go the same way. Does that mean they’re ipso facto not literature?

I applaud the effort and love that Jacobson has put into amassing his private archive. But to dismiss ebooks out of hand because of that? It’s like objecting to the practice of reading aloud because the listener isn’t actually eyes-down over the printed text. In the end it makes you wonder how much value Jacobson attaches to what makes literature literature at all. 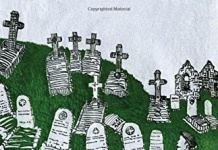