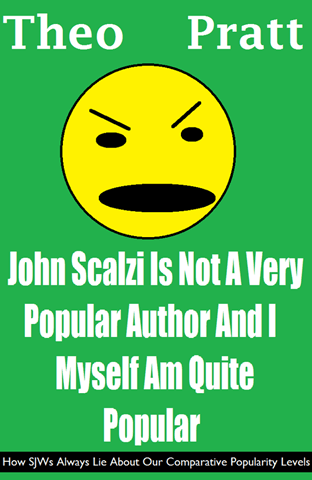 I haven’t touched on most of the Hugo and Puppy-related affairs of late. It’s only sort-of on topic for the blog, after all. Also, I think the more that is written about it, the more the flames get fanned, and I’d really like to see them have a chance to die down. (Whether that is actually likely to happen at this point is unclear, given how many people on both sides are so skilled at nursing grudges, but I can at least hope.)

But when an aspect of the matter pops up directly concerning e-books and self-publishing, how can I ignore it?

Last week, Theodore “Vox Day” Beale released a self-published 200-page screed on Amazon entitled SJWs Always Lie: Taking Down the Thought Police. I haven’t read it, nor do I want to, but it seems to be selling very well. I’m given to understand that Beale takes potshots at John Scalzi in the book, given that Scalzi has long been one of his favorite targets.

Not everybody took this book’s success lying down, of course. SFF writer Alexandra Erin wrote a much shorter satire of the work under the pen name “Theophilus Pratt”: the 28-page John Scalzi Is Not A Very Popular Author And I Myself Am Quite Popular: How SJWs Always Lie About Our Comparative Popularity Levels. Scalzi was so tickled that he turned this book into a pledge drive—if fans could raise $2,500 for the charity Con or Bust, he would do an audiobook recording of it (with permission from the author). He raised over $10,000, and did record the audiobook.

Beale and/or his supporters didn’t take this lying down, either, and so a 21-page parody of the parody soon appeared on Amazon, under the pseudonym “Alexa Eren”. This one traded on a long-running meme among Beale’s supporters, accusing John Scalzi of having confessed to rape because he at one time wrote a satirical essay in the voice of a rapist thanking conservative politicians for trying to pass rapist-friendly legislation. Scalzi complained to Amazon, and John Scalzi is a Rapist: Why SJWs Always Lie in Bed Waiting for His Gentle Touch was taken down.

But Ken White at Popehat suggests that the book is probably first-amendment-protected parody. Only a statement of fact can be defamatory, and the title would be examined within the context in which it emerged and determined to be satirical hyperbole. No one familiar with the situation would mistake the title of the book for a serious claim.

And Ken White would have reason to know about that bright line between hyperbole and fact—at the moment, he’s defending an anonymous Twitter user from a lawsuit by James Woods over a hyperbolic tweet.

Amazon self-publishing has become a popular method of pandering to audiences. Recently various figures have begun publishing elaborate manuals on how brave people can stand up to the terrible Social Justice Warriors who will mock and criticize them and such. To me this is a paradox: if you need a manual to stand up, no manual will help you. But never mind that. This e-book — titled “John Scalzi is a Rapist,” and echoing various memes that Beale followers like — is part of that trend.

Regardless, Scalzi’s takedown request didn’t keep the e-book out of circulation for very long. It’s for sale once more under the title John Scalzi Banned This Book But He Can Never Ban My Burning Love: A Pretty, Pretty Girl Dreams of Her Beloved While Pondering Gender Identity, Social Justice, and Body Dysmorphia. Scalzi actually isn’t especially upset:

Jerk: HA THE EBOOK YOU GOT TAKEN DOWN IS BACK WITH A NEW TITLE Me: (looks; title doesn’t falsely accuse me of rape) that’s fine. Jerk: …

So we’re not likely to see a lawsuit come out of this. This is probably the best possible outcome all around; Scalzi’s smart enough to recognize the danger of the Streisand Effect. (Too bad James Woods wasn’t.)

The funny thing to me isn’t so much the content of the books as it is the use of Kindle self-publishing as a battleground. Ten years ago, could anyone even have imagined that two sides of an Internet flamewar would be sniping at each other through the medium of self-published e-books? And, what’s more, that the self-published e-books would sell so well? Both the original Beale book and the parody are number 1 in their respective categories. (The parody-parody page doesn’t list a sales rank, but it’s probably selling pretty well, too.) It’s also interesting to note that only the parody-parody is available on Kindle Unlimited; neither Beale’s book nor the parody by “Pratt” are. Nor are those the only self-published parodies. Just searching Amazon on “SJWs always lie” pulls up several more.

It makes sense, really. Publishing something to Amazon isn’t much harder than posting it to a message board. Whether you’re being serious like the original work, or taking the mickey out of someone else like the follow-ups, you only need to write the screed and come up with a decent piece of cover art. Then, boom, you’re out there making money off the people who are sufficiently embroiled in the argument that they’re willing to kick in a few bucks (or check out a Kindle Unlimited title) to read your take on it.

And if you’re Amazon, you’re making money no matter who writes what. It’s as if Amazon is a more peaceful version of one of those weapons dealers who cheerfully sells guns to both sides in a war.

The world just gets more and more interesting with each passing day, doesn’t it?