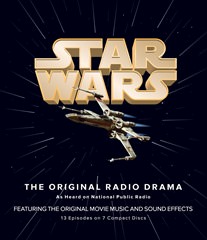 The Force is with us. It must be. Why else would the Humble Bundle put out a deal like this now?

The latest Humble Book Bundle consists of Star Wars audiobook titles. There are a number of DRM-free audiobooks in the collection, but to be honest I couldn’t tell you what most of them are without looking, nor does it really matter, because the centerpiece of the collection is the three-part Star Wars radio drama. The first two parts were produced for NPR in the early 1980s, and the third part was made in the ‘90s by the company distributing the first two.

Written by Brian Daley, the author of the Han Solo novels, this series considerably expanded the story behind the original Star Wars movies, filling in character motivations and events only hinted at on the screen. A few actors from the movies reprised their characters, including Mark Hamill for the first two, Billy Dee Williams for the last two, and Anthony Daniels from all three. (This would have been one of Hamill’s first experiences doing voice work. Perhaps this sparked the interest that would eventually lead to him doing The Joker on the Batman cartoons?)

Others were played by other actors who managed to do a decent job filling their characters’ shoes, including Perry King (better known from Riptide) as Han Solo, John Lithgow as Yoda, Brock Peters as Darth Vader, and Ed Asner as Jabba the Hutt. Return of the Jedi was literally the last thing Daley would work on; he died just hours after recording completed.

I remember listening to these shows on NPR growing up. They were amazingly well-written and acted, and it was a real eye-opener (so to speak) to hear the expanded version of events. (Until the “Expanded Universe” was declared null and void, they were considered an official part of Star Wars continuity.)  I would have owned them years ago, except they were all so expensive. Even now, it costs more than $60 to snag them all from Amazon. And here Humble has them on offer for $15, DRM-free.

The bundle includes a number of other titles, such as Star Wars: Tales of the Jedi, Star Wars: Dark Empire, and the Star Wars: Dark Forces Collector’s Trilogy. And Humble promises more titles will be added in a few days. But compared to the radio dramas, they practically don’t matter. The radio drama is a steal by itself. Any amount will get the first one, beating the average will add the second, and $15 will get all three. Apart from HighBridge Audio, the rights holder to these and other titles in the bundle, you can choose to direct some or all of your payment to children’s literacy charity First Book and/or the United Nations Children’s Emergency Fund (UNICEF).