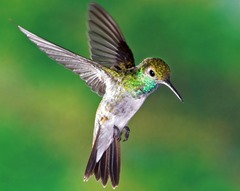 Here comes another Amazon competitor. Shelf Awareness reports that a new startup called Hummingbird Digital Media, founded by American West Books who supplies books to Costco, Sams Club, and other retailers, wants to “democratize e-book retailing.” Exhorting publishers, retailers, and authors to “Imagine a world where e-book sales were not dominated by three huge companies,” Hummingbird promises to offer a turnkey program to let retailers, non-profits, conferences, and even individuals such as bloggers and authors sell e-books to their customers.

The program will cover both e-books and audiobooks. It includes an operating system-agnostic app and a web-based storefront, both of which will be branded with the identity of the entity running the store. Reportedly the store will include “hundreds of thousands” of titles from thousands of publishers. The article mentions Macmillan, Harpercollins, Workman, and Sourcebooks.

Commenters on The Passive Voice are less impressed with the service. They note that no specific terms are available for the store unless one creates an account to get sent their “standard agreement,” and it seems like an awful lot of work to do for an uncertain percentage of the list price instead of just putting the book up on Amazon and collecting 70%.

From a search optimization point of view the name seems a bit unfortunate as well. Trying to search on Hummingbird Digital Media, even with quotation marks, keeps bringing up references to Google’s “Hummingbird” search algorithm.