For all I know, the standard experts might be right. But the Bexar County BiblioTech Library in the San Antonio area has banished p-books.

Meanwhile parents open to e-books for their offspring can try apps or Web sites from, say, the International Children’s Digital Library or Unite for Literacy or Project Gutenberg. Or they can go to commercial sources such as Amazon or B&N.

Now Kobo, which already had a children’s section online, is beta-testing Kobo Kids, an Android app that you can download from Google Play.

That’s in line with a recent UK study, which documented the enticements of e-books, especially for boys.

I like Kobo’s use of the Android since the cheapest Android cell phones are so inexpensive compared to Apple’s offerings.

Just imagine—only $10 when they’re on sale (even if that still leaves open the issue connectivity or whether families have sufficient digital literacy to deal with apps).

Another “pro” is that parents can look over a list of their children’s picks and decide which ones to really buy.

That can train the kids as  e-book shoppers without imperiling family budges. The app lets parents key in a password—actually numbers—to enable the actual purchasing.

As an e-book reader for kids: Superb graphics and easy nav

So how’s the app as an e-book reader for kids?

On the positive, the colorful graphics are superb, and children should be able to navigate very easily by theme (“Dinosaurs,” for example), authors (such as “Dr. Seuss,” whose Green Eggs and Ham shows up), series (e.g., Star Wars) or characters (the Paddington Bears). The organization isn’t as formal as on an adult site. But that’s fine. Kids are the real audience.

Themes include such categories such as “Dinosaurs” or “Space.” Outstanding is the idea of the “I am” category, within which kids can pick books allowing them to delve into the lives of famous people ranging from Abraham Lincoln to Helen Keller.

What’s more, parents and kids who don’t want to feel overwhelmed might want to start out with a limited selection of carefully curated books. And that’s exactly what Kobo offers. If, however, dinosaurs intrigue a bright young girl sufficiently, would she really want just 20 books to pick from?

That’s about the number of dino titles I found within the Kobo Kids app. The good news is that parents and children can go to the Web-based children’s section, do a search and find some 143 results from the keyword “dinosaur.”

Despite Kobo’s eagerness to “curate,” I’d have welcomed a search capability within the Kobo Kids app to give parents and kids more control.

Yet another issue is that many samples I viewed were just a few pages long. Often I could see only the front matter—not even a few pages from the first chapter (although there were exceptions).

Inside Dinosaur Days as KK displays it

For $3.99, I bought a full copy of Dinosaur Days, a Random House book, written by Joyce Milton and illustrated by Franco Tempestra, to see how the app would display books. The PayPal transaction—you can also go the credit or debit card route—happened without a hitch. I found the software easy to use with page swipes to move a page ahead or behind. At first I was put off by the small size of the type, but then I spread my fingers on the screen, and sure enough the words were easily big enough on my six-inch Nexus 6 for me to have read to a small child on my lap while both of us saw the words.  A more compact screen would have worked as well.

The downside is that you have to discover the finger-spread feature on your own. I know. It’s standard in Web browsers, but not all parents and kids may find it without help. 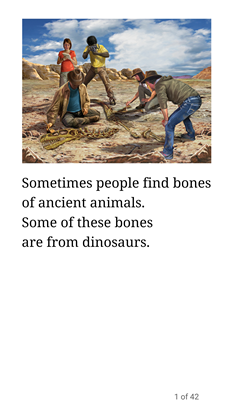 Very much on the positive side, Dinosaur Days’s art matched the level of the graphics of the Kobo app to hold kids’ attention. And the book did not include distracting multimedia. Mothers and fathers could focus on something far more important than video and audio—interacting with the kids, asking them questions, seeing what else they want to read.

The video and audio could come from separate sessions on YouTube. Parents could search for words such as the names of dinosaurs by species.

Separately TeleRead Editor Chris Meadows has warned against overdoing multimedia and other trimmings within books, and in this case he is absolutely right. Rather than losing themselves in the latest and great technology, children’s publishers of all sizes should focus most of all on old-fashioned editorial values for both text and art. That is what Random House has done here, and the new Kobo app offers an opportunity for the retailer to highlight the best books of this kind.

Here’s hoping that Kobo will soon follow up with an iOS version of the app.

Related: Nate’s take on Kobo Kids. He writes that within the app parents can only buy books on a children’s wish list. But, hey, it’s no big deal to get them from the regular store. Alas, however,  that raises a separate issue. I created an account in the kids’ app via my Google sign-in. I wanted to link that to a separate Kobo account with the usual sign-in instead of Google’s. Even though the sign-in worked fine when used independently, it didn’t in this case.

In a related vein, Nate found that “the app does not work with the limited Kids accounts that Kobo launched with the Kobo Kids Store in 2013. If you have ebooks in those accounts you will want to avoid this app, and instead use the regular Kobo app, and log into that app with the Kids account.”