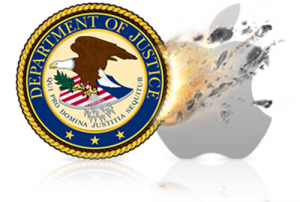 The Department of Justice has filed its response to Apple’s request for a Supreme Court hearing, and it’s just about all that could be expected. Apple wants to have the agency pricing price-fixing case it lost at the district and appeals levels heard by the nine Justices. Needless to say, the Department of Justice is not in favor of the idea.

The brief recapitulates the entire conspiracy, which story I’ve heard so many times by now that I could practically recite it in my sleep. Effectively, Apple wanted to add an iBooks store to its new iPad, but didn’t want to compete with Amazon’s $9.99 loss leader pricing. So, Apple VP Eddy Cue took on the job of herding the cats, getting the publishers to agree to go to agency pricing and force across-the-board price raises at Amazon and every other e-book store in existence. Cue managed to secure the agreement of five of the Big Six publishers, and the rest was history.

The Department of Justice then proceeds to demolish the arguments that Apple and its various amici put forward as to why the case should be re-heard. The big argument was that the courts erred in not considering the violation under the “rule of reason,” which is required for vertical price-fixing arrangements. However, the DoJ explains, Apple’s vertical agreements with the five publishers were not at issue here.

The matter at hand was the horizontal conspiracy among the publishers. The law concerning such conspiracies explains that anyone who took part in arranging the conspiracy is guilty, even if they didn’t actually do anything else illegal themselves as part of it. Apple was found guilty of per se violation of the Sherman Act for its role in getting the publishers in touch with each other and making sure they agreed with each other—not for anything having to do with its business arrangements with those publishers individually. Apple’s vertical agreements didn’t even enter into it—just the horizontal one it helped arrange.

The amici made a big deal out of a case from another circuit that supposedly set up a “circuit split,” because it decided a similar case to Apple’s in a different way. This case involved agreements among Mack truck dealers not to compete on price, and an agreement between dealers and Mack itself whereby Mack would deny discounts to any dealer competing on price. In that case, the vertical agreement was analyzed under the rule of reason. But, the Department of Justice explains, that case actually involves two separate agreements. Mack itself didn’t have anything to do with the horizontal arrangement among dealers, and it was being scrutinized for its vertical agreement with each dealer. With Apple, the vertical arrangements didn’t even enter into the matter.

It seems as though the stage is now set—we’ve heard from both sides, and now all that remains is for the Supreme Court to decide whether it wants to take a look at the case. Not that I’m a lawyer myself, but it seems vanishingly unlikely from what I’ve heard that SCOTUS will be interested. Despite all the fancy footwork and attempts at self-justification Apple throws in, it seems very much a bog-standard price-fixing case. All the emotional appeals its amici make, instead of actual appeals to law, seem to add to this. There’s an old legal aphorism that goes, “If you have the facts on your side, pound the facts. If you have the law on your side, pound the law. If you have neither on your side, pound the table.” In this case, there seems to be an awful lot of table-pounding going on.

For all of that, even if the Supreme Court tosses Apple out on its ear, it feels as though we’ve won the battle but lost the war. The original settlement annulled the contracts between the publishers and retailers, and required a reset in negotiations after several years. Each publisher would have to negotiate with Amazon for terms all on their own, without telling anyone else the details. But just the act of getting together and hashing things out the first time gave them all a pretty good idea of what everyone else would find reasonable, and all the months during which agency pricing was in effect the first time showed them how it worked. All they had to do was work toward that in their individual negotiations with Amazon when they were permitted to do so. So we ended up with agency pricing in effect again, all nice and legal this time.

So when I cross my fingers that the Supreme Court will decline to review the case, it’s not because I want the “good guys” to win. That ship has sailed. It’s more that I’m hoping  the entire affair can be ended and put behind us, and we can get on to whatever the next major e-book controversy is. The sooner the better, in my book.

(Found via The Digital Reader, which also has the PDF of the brief available.)