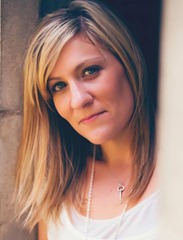 Author Cambria Hebert has penned a blistering open letter to Barnes & Noble on her blog, in which she discusses how she’s tried long and hard to get Barnes & Noble to recognize her independently-published books and stock them in its stores, but Barnes & Noble has consistently turned her down. The first time, her book was rejected with a “we don’t do self-pub” form letter response (even though her book technically wasn’t “self-published” in the usual sense, it was professionally-published through a LLC named after her so it’s easy to see how B&N could have been confused), so Hebert shrugged and kept plugging away, and tried again with later books.

When she tried again with her new title #Nerd, she got a friendlier but nonetheless condescending rejection of her book, which was available via distributor Lightning Source and should full well have been available to order via B&N. The form response she got talked about how she could make the book available as a Nook e-book and for special order via Barnes & Noble, even though she’d already done those things and it already was. She wanted B&N to stock it in stores, so it would have visibility to browsing customers—but Barnes & Noble wasn’t interested.

Hebert spends the latter half of the post angrily scolding Barnes & Noble for not giving independent publishers a chance. Given how quickly the publishing industry is changing, sticking with major publishers risks Barnes & Noble being left in the dust.

As I pointed out in my submission letter, adding just a few select independently published novels widens your potential. It not only introduces new and exciting content to readers who love to browse your shelves, but it also is a huge step in showing that you as a company are willing to be at the helm of this changing industry. It shows support in the written word and authors with talent.

I can certainly sympathize with her frustration, though I have some sympathy for Barnes & Noble, too. Barnes & Noble is in the unenviable position of being a legacy brick-and-mortar store trying to compete in the new era of publishing. It’s effectively whiffed on e-books. It only has so much space in its bookstores, what is it supposed to do? It’s not Amazon, which can and does carry everything (including having an extensive Cambria Hebert page of its own).

But on the other hand, I could argue that perhaps if Barnes & Noble devoted less space in its stores to toys and other boutique gimmicks, it might have sufficient room to put in an independently-published shelf or two. It might be a problem picking out which ones go in, but there are sales figures and things—including its own sales figures from BN.com, where it does carry such books and would be able to know which ones people were actually ordering from it. (Then again, the store chain and the web site are different companies, and B&N’s brick-and-mortar locations can’t honor the web store’s prices, so there might be other barriers in the way of that.) At any rate, just because it can’t stock every independently-published title in its stores doesn’t mean it shouldn’t try to stock some of them. It can’t stock every Big Five book, either, but still carries plenty of those.

When you come right down to it, it’s very hard for a big company to change its mindset about anything. Companies founded in earlier eras like that tend to be set in their ways, and run from the top down by people who’re still trying to compete in the world as it was a couple of decades ago. Maybe that’s why Barnes & Noble has done so badly, but still doesn’t even seem to know it has a problem.

In the end, I don’t think Barnes & Noble is likely to change—and if it does, it won’t be because of one heartfelt open letter from a justifiably angry independent publisher. When it comes to staying in business in the new publishing era, this may be just another brick in the brick-and-mortar wall sealing Barnes & Noble up like the victim in that Edgar Allen Poe story.