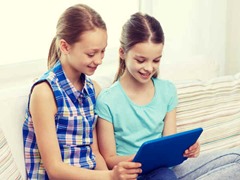 Researchers have found that inexpensive tablet computers loaded with learning software can greatly help young children in economically disadvantaged communities learn to read. This seems like a bit of a no-brainer to me, given how long educational software has been around—they wouldn’t keep using it if it didn’t work!—but I suppose it’s useful to quantify how well it works.

Researchers presented the results of the first three trials of the study in Britain at the Association for Computing Machinery’s Learning at Scale conference. They tried the tablets and software in rural Ethiopian villages with no schools or written culture, a suburban South African school with a high student-to-teacher ratio, and a US school in a low-income rural area. Students in all three studies showed significant improvements.

The tablets used in the studies were inexpensive Android tablets, locked down to provide access only to approved educational software. The children, ranging in age from 4 to 11, were not given any instruction on how to use the tablets ahead of time.

While the results may seem fairly obvious, I think the most important thing to consider is that, given how inexpensive tablets have gotten over the years, this is a solution that may finally be within the grasp of even the least affluent schools. Plenty of sub-$100 Android tablets are available, and so is the $50 Amazon Fire. Why should schools spend several hundred bucks a pop on iPads if they can eke out a significant educational benefit with a lower budget? Of course, the study didn’t compare how well kids learned on cheap tablets to how well they learned on expensive ones, but if they were able to learn that well on cheap ones, could expensive ones really merit the extra cost?