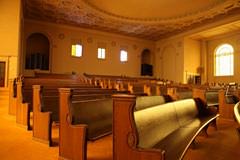 The telethon will be held at the Internet Archive’s headquarters building, a renovated church at 300 Funston Avenue in San Francisco. The event will be livestreamed and also open to public attendance. There will also be attendee audience participation. Former Netscape staffer and nightclub owner Jamie Zawinski (aka JWZ) is helping round up acts to perform during the event.

The Internet Archive performs a really valuable service, and I hope their telethon event goes well. In particular, I hope it goes better than the one for the MST3K revival the other night, which was fraught with often-hilarious technical difficulties. But then again, given that the MST3K fundraiser resulted in over $6 million in donations, perhaps doing that “poorly” wouldn’t be a bad thing either.