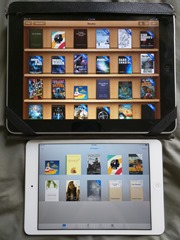 As I mentioned in my last post, I’ve been fiddling around with iBooks on both my iPads lately, working out how to transfer a book from my old one to my new one. It occurred to me that it might be interesting to revisit my old review of iBooks which I did on April 22, 2010—almost exactly six years ago. 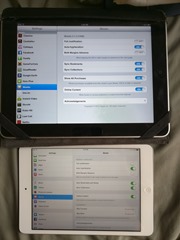 The first thing that I noticed is they had actually fixed some of my original complaints about iBooks as of the last version my first-generation iPad was able to download from the app store (3.1.3). The configuration dialogue includes options for toggling both full justification and hyphenation—so there’s no more need to reconvert books in Calibre to get rid of the full justification, and less bother with “rivers” of spaces in the text. 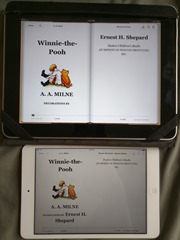 The dramatic changes largely have to do with the skeuomorphism. The earlier versions of iTunes went a little crazy with it. The default book display was a wood-veneer bookshelf, which would swivel around like a secret revolving door to reveal the iBooks Store at the touch of a button.

Most e-book files were displayed with a screen border that imitated a hardcover book, complete with a bunch of pages on one or both sides and even a spine. And, of course, there was that silly, patented page-turn animation you got when you swiped to turn the page. (This all applied to plain-vanilla EPUBs; multimedia e-books like Yellow Submarine or the Mozart book I discussed here dispense with it in favor of a cleaner interface.)

It was all very pretty—and in retrospect, it looks sublimely ridiculous now. How did Apple ever think that the big thing that kept people from wider adoption of e-books was that they didn’t look like paper books? And how could they imagine putting the text in a book-shaped picture frame would change that? 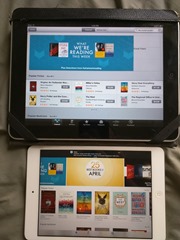 The new version of iBooks tones that skeuomorphism way down. There’s no more wood-veneer bookshelves; just a featureless grey background. There’s no more revolving bookshelf, either, just a simple screen-change—and the iBooks Store as seen in the app has gotten more polished, too. Instead of presenting books with prices as if they were iOS apps, it looks more like a web e-book store now—and there’s more than just one store screen. The new iBooks also features access to several additional store screens—two different sets of best-seller lists and a “top authors” listing, which should help readers find the book they’re looking for more easily.

The cover-and-pages motif is gone, and the “spine” too, leaving a much simpler display of text that now has a lot more in common with Marvin or Gerty than I’d thought when I was writing that review. It does still keep the page-turn animation, though. Of course, even the earlier iBooks would let you turn the skeuomorphism off, by opening the font dialogue, tapping “Themes,” and selecting “Full Page View.” But the new iTunes doesn’t give you the option to turn “Full Page View” off to get the skeuomorphism back. 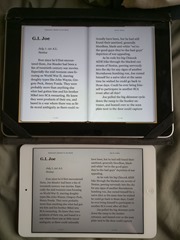 But for all of those changes, the user interface is still fundamentally the same—buttons for library, table of contents, font options, text search, and bookmark in the upper right corner, and a scrollbar at the bottom you can drag to wherever you want it. The appearance of the elements has been altered for a much more polished look, but they’re still in the same places and do the same things. Also, the new iBooks has one more font choice than the old—the sans serif San Francisco.

And both the old and new iBooks support a “Scrolling View” theme, which switches iTunes over to work more like Gerty—one long page you scroll up and down with your finger, or with the scroll bar that is now on the right side of the screen instead of the bottom. That’s a useful option for people who prefer the scrolling view. 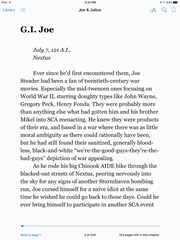 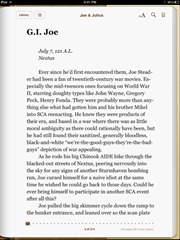 But the biggest thing I noticed probably doesn’t come through as well in the photos—so take a good look at these screenshots instead. I don’t know if the size-reduced versions TeleRead serves up will make it as clear to you as it is to me from looking at the screens, but it’s worth a try.

I used to enjoy reading on the old iPad with no problems, but take a good close look at those fonts now. The resolution there is just terrible by comparison to the new Mini 2. You can see the fuzziness of it with your naked eye. So let’s hear it for Retina displays, I guess.

So, would I still keep using iBooks now? It’s still a decent reader for EPUB files, with a simple interface and snappy response times, so there is that. But I never bought nor wanted to buy e-books from the iBooks store, so there’s no reason I should need to use iBooks rather than some other app, save for those few books I got free from the iBookstore.

One of the big advantages I noted to iBooks back in 2010 was how much easier it was to add content to than Stanza—but Marvin can grab e-books from Dropbox or Calibre, which is even easier than having to use iTunes as a sync conduit to put them into iBooks.

And Marvin’s “Deep Reading” mode has a big advantage over iBooks when it comes to understanding the book I’m reading. So, seriously, I don’t think I would use iBooks regularly anymore. Not when there’s something simple, easy, and powerful like Marvin. The only real advantage iBooks has is that it’s free—but Marvin only costs four bucks. And given what-all you get, I’d say that it’s worth it. 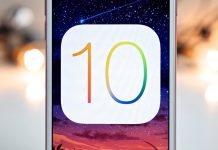