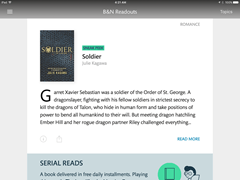 Last night I looked at the Nook reader for Windows. Now I turn my attention to the version for iOS. I’ve already reviewed three terrific readers for iOS—Marvin/Gerty and iBooks. Is there anything in Nook for iOS to make it worthwhile?

Perhaps the most interesting thing about the iOS Nook app is what’s different from the PC version. The first difference is immediately obvious when you launch the app and come to the home screen. The available sections are different from the PC app. Most notably, there’s a screen for “messages” (from who? Barnes & Noble? I don’t have any in my inbox) and one for “B&N Readouts,” a section where sample text from dozens of books is presented in the hope of hooking a reader into a purchase.

There’s also a “My Shelves” section, where you can define custom collections of books added from your library. If you want easy access to a few titles you’re reading right now, you can make a “Books I’m Reading Right Now” shelf and put them in it. If you have a lot of books in your library, that could be handy. Oddly, the Windows app doesn’t have anything like that.

If you want to sideload your own content to the library, that’s possible as well. You just have to use some other app to download it, then use the share button (a square with an up arrow pointing out of it) and tap on the “Open in…” icon with the “app” symbol on it. Scroll sideways through the app icons until you find “Copy to NOOK” and there you go. I was able to sideload EPUB books from Dropbox with ease. 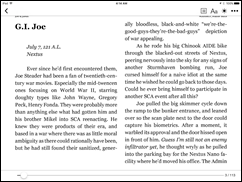 Once you have the e-book open, reading works about the same as on Windows. Instead of right-clicking, you tap on the top of the screen to open the upper and lower toolbars. The lower toolbar has a scrollbar with a handle, and the upper one has icons for table of contents, text options, brightness, and a three-dot symbol for a bookmarking-and-search menu. 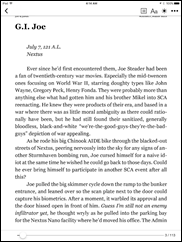 There’s also a “More Options” menu that includes the ability to toggle justification, publisher defaults, two-page landscape mode (the iOS app only supports one column in portrait and one or two in landscape—not the three or four you can have on a desktop), and page-turn animation. I was so startled to find this that I had to go back to the Windows version and double-check to make sure I hadn’t missed seeing it there—but no, I hadn’t.

This is good, because with a much smaller screen, the drawbacks of full justification are more obvious—especially in the narrower two-page landscape mode. Even the fact that the iOS app supports hyphenation where the desktop version doesn’t isn’t all that helpful. But it looked a lot less distracting to me with full justification toggled off.

Unlike the Windows app, the iOS app supports page turn animations. But once I turned them off, paging from one screen to the next was much more snappy, just like on the desktop app. So I think I’m just going to keep it turned off.

So, in the end, what is there to say about Nook for iOS? The Georgia font is as easy to read here as anywhere else, and with the page-turn animation turned off it feels snappy and responsive. The ability to disable full justification is nice, as is the ability to sideload your own content. But what reasons might you have to use it rather than Marvin or iBooks?

The most important is, of course, that as far as I know it’s the only way you can read DRM-locked Nook e-books on your iPhone or iPad, including any eReader or Fictionwise titles that survived the transition over after Barnes & Noble closed those stores down. But apart from that, it’s not a bad reader for generic EPUBs in its own right. If you own Nook books and don’t want to clutter up your iPad with multiple e-reader apps, you could easily get by with just the Nook reader.

I’m still going to keep using Marvin for my DRM-free stuff, though.