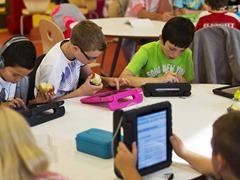 The Brisbane Times discusses an OECD report indicating that investment in computers and iPads in schools are not helping students’ numeracy and literacy skills. In fact, they may be hurting it—according to the report, schools that more frequently use computers often have lower results.

“If students use smartphones to copy and paste prefabricated answers to questions, it is unlikely to help them to become smarter,” the report said. “If we want students to become smarter than a smartphone, we need to think harder about the pedagogies we are using to teach them. Technology can amplify great teaching but great technology cannot replace poor teaching.”

This makes sense. It’s possible there might be an impulse to regard computers as a panacea, but educators shouldn’t lose sight of the fact that they’re just tools, and it’s up to those educators to decide how the tools are used. They shouldn’t slack off just because they have computers available.

On a related note, a post popped up in my Facebook feed from Kevin Lawver, the founder of Ficlets and Ficly, complaining about the way his children’s school configures their iPads to require the use of their school’s unreliable web proxy, even when being used on Wi-Fi at home.

They already have the iPads locked down to disable almost everything that could be exploited on it (or mischief the kids could get up to). How about letting me manage what my kid accesses at home?

For example, the proxy is so unreliable that I had to grab the boys’ old Chromebook and logged him into his school Google account so he could do his research and put it in a Google Doc.

So even those iPads schools do offer may not be the most useful tools by dint of all the restrictions placed upon them.

It occurs to me to wonder just how middle and high school students will be affected by the way tablets are becoming more and more affordable now. When iPads were so expensive that many families couldn’t afford them, having them be provided by schools made sense. But what about when parents can get their kids a $50 Amazon tablet? While it may not be as polished as an iPad, or offer access to the same educational software, a Fire will nonetheless serve quite well for accessing web-based resources and reading e-books—and it will be considerably better than nothing for doing those things.