Hard as it may be to believe, until last night I had never actually read a complete book in Amazon’s Kindle Reader software. I had several on my iPod Touch—freebies that I had downloaded and intended to check out, though not enough to have read yet. But I finally decided to give it a spin when I found a book I wanted on Amazon but not on Fictionwise.

Last night I ordered the latest Mercedes Thompson novel by Patricia Briggs, Silver Borne. It was very easy; all I had to do was go to the Amazon page for the book, select the Kindle version, click the “Order with one-click” button, then choose a device to which to send it. (I was then able to go to the Kindle Settings page and send it to all of my devices; more on that later.)

Then I opened the Kindle app on my iPad and started reading. For the review, I tried the iPad app, the iPhone app, and the Windows desktop app, but the majority of my reading was done on the iPad.

The Kindle app uses a nicely legible serif font, the same one across all three platforms as far as I can tell. There does not seem to be any way to select a different font face, but the default is legible enough that it was simply not a concern for me.

There is a tool/menu bar on the iPhone and iPad versions, the same across both save for cosmetic differences. It is opened by tapping in the middle of the screen and includes the options to jump back to the cover, add a bookmark, jump to a location, change the font size and color scheme, and re-sync the book with Amazon’s servers to obtain the new “furthest read location”. There is also a button to jump back to the “home” screen book list. The desktop version has its own persistent menu bar at the top of the screen with much the same options.

The iPhone and iPad Kindle Reader apps have five font sizes each, whereas the PC version has ten. They are not named or numbered; the reader simply shows a series of “Aa” letters as examples of the size of each given selection. The iPad and iPhone version also have a choice of three reading color schemes: black-on-white, white-on-black, and sepia-on-parchment. 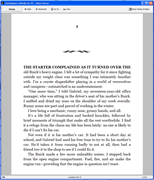 Like iBooks, the Kindle reader uses full, non-hyphenated justification, and there is no way to disable it. But for some reason it doesn’t look as obvious as it does on iBooks, at least on the iPad. Somehow Amazon manages to avoid the “rivers” of white space that are a distracting problem in iBooks. This isn’t as possible on the smaller screen of the iPhone, though it does look better in landscape with a slightly wider line.

There are a few cosmetic differences between the iPhone and iPad versions of the Kindle Reader (apart from the obvious one that the iPad can show more text), but nothing big enough to warrant its own section in this review. The main difference is that the presentation of the menu bar and options dialogues look a lot nicer on the iPad’s bigger screen—for instance, the iPad version can show samples of the color choices rather than just their names.

Also, as you will see if you click on the thumbnails above, the iPad version adds some subtle shading around the border, to make it look more like a real piece of paper. I didn’t notice this until I uploaded the screenshot. I have to say, it’s really pretty, and a lot less blatant than iBooks’s “look, it’s just like a real book, really it is!” screen border.

The Kindle Reader app is pretty dead simple. It’s just a screen of text that you page forward or backward in. Paging on the iPhone or iPad is done either by tapping on the desired side of the screen (right to turn forward, left to turn back), or swiping in the direction you want the paper to move (right to left to turn the page forward, left to right for backward). Swiping works in the proper direction no matter which side of the screen you do it on.

There is no fancy page-turning sound or animation like in iBooks or Classics, just the column of text moving from right to left or vice versa, but it really isn’t needed. All that silliness about looking just like a book is a great way to invoke the Uncanny Valley effect and remind people that they really aren’t reading a book.

Placing bookmarks is done by tapping the screen to invoke the menu bar, then tapping the upper right corner of the screen, or the “+” icon on the lower menu bar. Notes or highlighting can be placed by touching the screen to select a single word. As far as I can tell bookmarks and notes don’t seem to be synced between devices—or if they are, I haven’t figured out how to do it yet.

One function that’s nice on the first readthrough but annoying afterward is the much-vaunted “whispersync” that keeps your place in each device on which you are reading the book. When you launch the book on a new device after having closed it on the old one, it asks if you want to jump ahead to the furthest location.

It is nice to be able to find your place easily across multiple devices. The problem is, once you’ve finished reading it for the first time, the whispersync place-keeper is “stuck” on the last page, and I can’t figure out how to reset it. (If anyone else knows, I’d appreciate finding out.) This means that it is considerably less useful if you are re-reading a Kindle book.

Whispersync can be disabled from the “Your Account –> Manage Your Kindle” page on Amazon, in the “Manage synchronization between your devices” link at the bottom of the screen.

Amazon says that you should turn synchronization off only if two people using Kindle devices on the same account are reading the same book at the same time. Funny to see them coming out and suggesting that as a use case, given that the publishers would probably prefer everyone to buy his or her own copy.

However, for the iPhone and iPad applications, the only way to add content is by buying and downloading it from the Kindle store. (Or by jailbreaking your device and manually copying it into the Kindle’s library directory, but there are so many simpler ways to read an e-book on your iPhone that the only point in doing that is to prove that you can.)

If you have an actual Kindle e-ink device, you’ll get an e-mail address that will let you e-mail books to it for a nominal charge, or I am given to understand you can hook it up to your computer via USB and load it like any other e-book reader. But the e-mails only apply to Kindle devices, not to multipurpose devices running a Kindle app.

When you buy a Kindle e-book, as I mentioned above, you are given the option of syncing it to one of your devices. If you want to sync it to your other devices, you must click on “Your Account” at the upper right corner of the screen, then click “Manage Your Kindle” under “Digital Management” (in the fourth section down, “Digital Content”).

Your library of titles is at the bottom of the page, and each one has a “Deliver To…” dropdown menu next to it. Simply select the device you wish to use, and the device will send that book to that device. When you launch the Kindle app on that device while connected to the Internet, it will connect to Amazon and download the book.

One nice thing about the one-click purchase process is that Amazon “trusts” you. Your book is delivered right away, before Amazon even attempts to charge your card. (I found this out because I had an old card number registered on the site, and got a notice a few minutes later that Amazon hadn’t been able to charge the book I ordered. I paid for the book out of a gift certificate, but Amazon apparently needs a valid charge card on file even so.)

It’s a little annoying that you can’t add your own content to the reader, but on the other hand there are enough other ways to read e-books on iPhone and iPad that you don’t really need to. Any DRM-free Mobipocket file you would otherwise want to read on Kindle Reader could be loaded through BookShelf, or changed to an EPUB with Calibre and sent to Stanza or iBooks.

(I’ve already amply covered the annoyance that the Kindle Reader won’t read the DRM’d Mobipocket books already bought from Fictionwise or elsewhere, and don’t see any point beating that particular dead horse here. Ways and means to deal with Mobipocket DRM can be found by those who search hard enough..)

In the end, the Kindle Reader is not at all a bad way to experience e-books bought from Amazon. Now that Fictionwise and eReader are apparently going the way of the dodo, I anticipate shifting most of my e-book purchases here—I can read Amazon Kindle books on every platform I actively use, whereas iBooks are limited to the iPad for now (and there’s no guarantee that when the iPhone iBooks app comes out it will even run on my first-generation, not-fit-to-receive-OS4 iPod Touch).