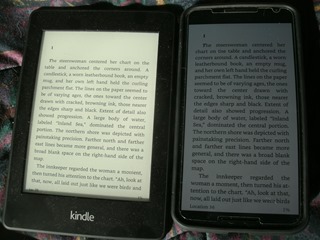 Investment company Morgan Stanley is bullish on Google’s prospects thanks to recent Android smartphones’ bigger screens. Might e-books be an important reason for their success?

“Indeed, the growing mix of large-screen smartphones combined with our agency conversations (are) indicating that these screens are monetizing higher,”  Nowak wrote. He says such ads are getting 20% to 35% higher costs per click, which is how much Google is paid each time someone clicks an ad. He says larger-screen smartphones could boost Google’s search revenue by 3%.

I’m not sure how viewing it on a bigger screen makes someone more likely to click on an ad, but I suppose these professional stock market analysts know their own business best. I do know that people who want bigger smartphone screens don’t typically buy them for the sake of making ads look better. They buy them for viewing other things. So this uptick in Morgan Stanley’s projection for Google is indirectly attributable to people wanting to do those other things.

I doubt that e-books are the main reason most people buy big-screen phones—after all, they’re also great for playing games, watching movies, browsing the web, making sure that photo or video you’re going to take has a good composition, and so on—but I do know a lot of people are reading e-books on their phones these days. And I know that my own big-screened Nexus 6 is one of the best e-reading devices I’ve ever owned. As the photo above shows, its screen holds very nearly the same text as my Kindle Paperwhite. So maybe at least some people have that in mind when they’re looking into their smartphone options.

But no matter the reasons people use them or they’re considered good for Google, perhaps the most interesting thing here is that those bigger screens are considered good for Google, to the point where they caused an investment firm to give Google a higher rating for them. Oddly enough, this comes at the very same time Apple’s introducing a new iPhone model with a smaller screen. But then, I expect the audiences are mutually exclusive to some extent; I have friends who simply don’t want a phone “that big.”