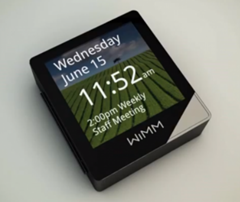 Smartphones already expanded into a bigger form factor with tablets, but shrinking into a smaller form factor has been giving it a little more trouble. While the Pebble e-ink smartwatch did well as a kickstarter and has been garnering good reviews, Samsung’s Galaxy Gear—a twice-as-expensive watch which only syncs with Samsung phones and whose internal battery is not sufficient to operate for even one entire day—has faced a return rate as high as 30% at Best Buy.

But perhaps the best smartwatch may be yet to come. Gizmodo reports on the smartwatch that Google is developing, based on designs from a smartwatch company it recently bought. The company’s previous design used a two-mode screen with a bright color setting and a power-efficient greyscale, reminiscent of Pixel Qi’s bi-mode displays. It was basically a one-inch slab running Android.

The Pebble is a decent effort; I have a friend who has one and is very happy with it. But all it really is, more or less, is something like a clamshell phone’s outer notification screen, just strapped to your wrist. It shows notifications of incoming messages, lets you track skip your audio player, and that’s about it. Convenient, maybe, but all it does is tell you when you need to pull out your phone to see more. But a watch that’s a genuine fully-functional micro-sized Android tablet could do so much more. It could put Google Now, Google’s information-as-you-need-it app, on your wrist. It could run apps, maybe even e-book readers.

And it would have the same “home team advantage” as any Android-powered device from Google. Nothing runs Android better, does more with it, or is better-updated than Google’s own Android devices. For the half of all mobile device users who use Android already, this could be the smartwatch killer app. At the least, it will be both less dorky and less expensive than wearing Google Glass around all the time.