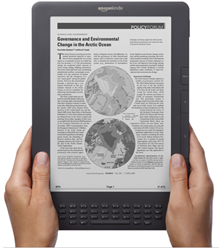 Jakob Nielsen, the Web usability guru, is a hero of mine in many ways.

Bow toward Fremont, California, or wherever he works these days, the next time a struggling e-newspaper iinflicts a horrid full-page ad on you with “Skip this” in tiny type. Those are hate crimes against readers: the stuff Nielsen preaches against. Kudos to him!

Nielsen’s latest e-book-related study, however—comparing reading speeds for the iPad, the Kindle and paper publications—means little in the long term.

He seems to imply as much when he says the results are “promising for the future of e-readers and tablet computers,” even though the paper books have won for now. The iPad speed score with the same subjects was 6.2 percent slower than paper; the Kindle, 10.7 percent. He considers the iPad-Kindle difference to be not that significant statistically, but says that paper is clearly ahead.

While I’m pleased that Jakob Nielsen is stirring up interest in this essential topic, especially at a time when many schools expect textbooks to go electronic, I’d like to raise the following questions:

–Shouldn’t Nielsen’s study have included at least one app like the Stanza program, which allows the use of Aerial Rounded MT Bold on for e-book fans using the iPad? I know: “Testing a single iPad reader let us more easily compare it with the Kindle, which has only one user interface.” But in Nielsen’s place I’d have included the Stanza app, too, or another with some kind of bolding available for all text (not just chapter heads or subheads, for example). Both the Apple iBooks app and the Kindle counterpart for the iPad  this one-swoop boldfacing capability. And believe me, the absence of it slows me down, and probably lots of other users, too Last I knew, Bookeen was offering an embolden feature in its E Ink readers. When, just when, will other companies do the same for both E Ink and LCD screens alike? Better still, how about a way, if possible, for users to vary the weight of the fonts?

–I haven’t tried the newest Kindle DX, in the photo, but isn’t Amazon claiming: “Our graphite Kindle DX uses our all new, improved electronic ink display, with 50% better contrast for the clearest text and sharpest images”? Nielsen’s test used the Kindle 2 instead. Significantly, he himself acknowledges the importance of contrast issue: “Most of the users’ free-form comments were predictable. For example, they disliked that the iPad was so heavy and that the Kindle featured less-crisp gray-on-gray letters.”

–Just why didn’t Nielsen at least have his subjects try the older Kindle DX,  with the 9.7 inch screen rather than the K2’s six-incher; bigger displays mean less page turning. Also keep in mind the delay on an E Ink machine when you turn a page. It’s shorter on the Kindle 2 than on old devices but is still there, one more reason why a large screen reducing the number of turns would help.

Something I loved about the Nielsen study was the finding that on a 1-7 satisfaction scale, “the iPad, the Kindle, and the printed book all scored fairly high at 5.8, 5.7, and 5.6, respectively. The PC, however, scored an abysmal 3.6.” That’s helpful information. Isn’t it interesting how the iPad and Kindle beat the paper book? Alas, even many recreational readers still try to enjoy e-books on PCs with less than optimal ergonomics, and the sooner the industry can get them to switch over to tablets, the higher will be satisfaction with E—and the number of purchases of e-novels and the rest. Lower e-book hardware prices, of course, should help.

A reminder: Reading speed isn’t the same as comprehension—check out comments from Bruce Wilson and Marilyn Byerly.

Related: Paul Biba’s earlier item on the Nielsen study (thanks, Paul, for interrupting your Fourth of July weekend to get your item posted). I was tempted just to write a comment, but usability is topic I couldn’t be more passionate about—hence the above post, in the main part of the blog.

And unrelated: Happy Fourth of July and—for non-U.S. citizens—honorary Fourth of July! July Fourth is also when Project Gutenberg founder Michael Hart digitized his first document, the Declaration of Independence. By the way, July 1 is Dominion Day in Canada, so special if belated best wishes!