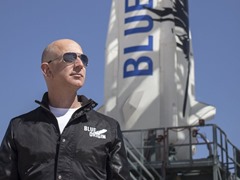 Fortune Magazine has an interesting feature-length profile of Jeff Bezos’s leadership style, as reflected in Amazon, the Washington Post, the Blue Origin private space launch company, Amazon Books, Amazon Web Services, and other enterprises. (Warning: the article opens with an obnoxious autoplaying video, so make sure your sound is muted if opening it in a quiet environment.) The thesis of the article is that Bezos has moved from being a hands-on leader of all aspects of the business to being a leader of leaders, good at delegating authority and keeping businesses on track.

Under Bezos’s hands-off leadership style, the Washington Post has flourished (as we’ve mentioned a time or two ourselves), watching its traffic grow to go head-to-head with the New York Times, while the Wall Street Journal putters along a good distance behind. Bezos wields no editorial control, but he does have suggestions for usability improvements—some of which are (rightly) shot down by the Post’s editorial team, such as an idea for monetizing “disemvoweling” controversial articles.

Another business that’s doing well is Blue Origin, which may not be as far along as Elon Musk’s SpaceX but is nonetheless showing off an impressive string of accomplishments. Bezos himself hopes to ride one of its New Shepard capsules into space in a couple of years. As with the Post, Bezos is keeping hands off and leaving the running of the company to the experts in the field, though he does take meetings and progress reports on the state of the company and its efforts.

The article also discusses Amazon Books, though there’s not really any new information there that we haven’t mentioned in prior coverage. Given that the article was originally published on April 1, well before news came out about the Kindle Oasis, there’s not anything directly pertaining to the device there. Nonetheless, from the point of view of some calling the Oasis a sort of e-reader-as-expensive-fashion-accessory, this was an interesting paragraph to read:

It’s all too much for Bezos to micromanage, and he acknowledges picking his spots. His latest passion is for higher-end fashion, an area Amazon has been upgrading in recent years; Bezos says he is focused on Amazon’s plans for its own private label. “I think there’s so much opportunity for invention there,” he says. “It’s very hard to do online. It’s fragmented offline. People value a curatorial approach.” This, he says, is a significant departure for Amazon. “We didn’t curate a selection of books.” As for Bezos’s other areas of focus at Amazon, he says he’s spending time on “certain elements of AWS, but out a few years,” as well as on Alexa and the company’s fulfillment centers. As for specifics, “I can’t really share any because it’s too much of a road-map kind of issue.”

What other “higher-end fashion” e-reader gizmos might Bezos launch next? A super-swanky edition of the Fire HD tablet, aimed at stealing some of Apple’s iPad thunder? As for his future plans, working on the company’s fulfillment centers makes sense given that those will be the driving force behind not only additional Amazon Books stores, but also the planned drone delivery service if it ever gets off the ground (so to speak).

It’s also intriguing to hear that Bezos is looking several years into the future of AWS. Ordinarily, you wouldn’t think there’s a lot that could be done about web hosting from year to year, as it’s one of those services that tends to stay largely the same—but something tells me that if Bezos is making plans years in advance, they’re for something more than just scheduling server upgrades.

Whatever Bezos plans for the future, it’s interesting to see how he looks at his various leadership roles. I wouldn’t be at all surprised if we saw a Bezos Presidential run in another eight years or so. After all that experience running businesses, he certainly couldn’t do worse than Cruz’s new running mate, Carly Fiorina—who’s known more for running businesses into the ground.