Digital Book World‘s Jeremy Greenfield has just penned a very interesting and thought-provoking article over on Forbes. As the answer to the great “what is going to happen to Nook?” question, he advocates that Barnes & Noble should build out the Nook Press self-publishing operation, B&N’s answer to Kindle Direct Publishing, into a print book franchise. “Start selling self-published print books in Barnes & Noble stores,” he urges. 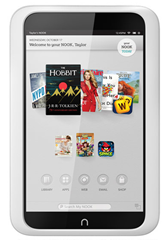 Arguing from the amount of shelf space that B&N already gives over to Nooks in its stores, Greenfield points out that: “the company owns Sterling Publishing, a New York-based publisher. On Nook’s dime, Sterling should add a print-only imprint for these titles, called something like Nook Print. This imprint will exist solely to bring these Nook-exclusive digital self-published titles to print and into stores.”

Is it practical? Would it achieve anything? Well, Greenfield argues partly from the purely gestural basis that “whatever Barnes & Noble is doing right now for Nook is failing miserably. Why not try something drastic?” But there are some more substantial arguments in favor of the idea. For one thing, if B&N wants to steal back a little of Amazon’s commanding self-publishing lead, this might give it a different value proposition instead. “For many authors, the ultimate reason to publish a book is to see it on the shelf of a local bookstore,” Greenfield continues. “I think that many self-published authors would give up the additional ebook sales with other platforms, most notably Amazon, to see their books in stores.”

There’s some truth in that, not least as print book sales (as opposed to large chain bookstores) are clearly not going away in the near future. Also, print-on-demand and similar low-volume printing methods, not to mention B&N’s top-down insights into its own distribution chains and stock levels, are likely to make this a relatively manageable proposition. Furthermore, B&N’s Nook sales outlets in other book chains worldwide could give immediate POS presence for its own titles. Also, if the program is applied to titles or authors that have already built up a sizeable following in ebook format, it will make demand levels far more predictable. And finally, it could square one circle for the book trade by giving print book publishing and bricks-and-mortar bookstores a direct means to capture the dynamism of self-publishing.

Will it happen? Do those merits hold up? Opinion invited, but I’d love to know how B&N especially rates this idea.