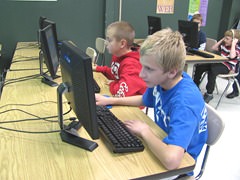 This year I have a say in the matter, as developer of a schoolwide technology curriculum for my school here in the Toronto area. These issues aren’t just Canadian. I’ll welcome questions and suggestions from south of the border—in fact, anywhere on Planet Earth.

I enjoy curriculum development, and the provincial standards for this area are vague and anemic. They simply are not up-to-date with what’s needed in the classroom, and any teacher who wants to teach this properly is pretty much on her own.

Our lower grades will be using the iPads as part of a centres-style learning program where we will be using educational games to focus on phonics, math and other core skills. But for our older students, I am thinking ambitiously and hope to teach them real skills.

Most of their prior tech experience has been with the school iPads as a reward or ‘free choice’ activity. They are not used to using them for actual work, and they see themselves primarily as content consumers, not creators. I’d like to change that.

In this monthly TeleRead series, I will be reporting on my activities with my Grades 1-4 classes. I hope this can be a useful resource for others who want to use technology in the classroom. With that said, here is what we worked on in September.

Many of these kids had never been on real computers before. They had no concept how to work the mouse or use the keyboard. I had intended for this to be a typing module. But after the teacher whose classroom hosts the computer lab complained, we spent more time than I had planned teaching them how to log on, log off, close programs and so forth.

They did enjoy the typing, though. We played a web-based typing drill game which most of them liked, but a few kids found it challenging and a few others cheated non-stop. So I backtracked, gave them each a Word file, and did some old-school drills which they found hilarious. We worked with a few keys at a time and I simply called out letters. I tried to make funny sentences when I could (‘the sad dad sags’) and they had a blast.

I introduced the concept of emailing to my Grade 2 class. We started with a quick demonstration of what a text message is, and when it might be useful. I introduced the e-mail as a tool for writing longer, more considered communications.

Then we got right into our first e-mail—to the principal—which I used as a template to model the different parts (address, subjects line, salutation, body and so on). Our principal gamely wrote back to them, and so ensued an adorable back and forth.

For instance, when I suggested to them that they might end the email with a ‘call to action’ suggesting what sort of response they were looking for, they immediately shouted, ‘Oh, oh, write us back! In ten minutes!’ I gently suggested to them that ‘before our class on Wednesday’ might be a more appropriate window for response.

My one regret was that composing the many replies which resulted from this initial e-mail volley took up more class time then I had planned. I eventually assigned them each a teacher in the school and had them compose an -email of their own. I wish we had more time to spend on that. Several teachers have written them back already, and they all went to send replies. But alas, we cannot spend all year writing e-mails to the teachers to ask them if they have a dog. It’s been fun, but I am going to have to cap it at one reply per kid.

I did a photography unit with my most senior class. They had a blast! We used the iPad’s photo app to take pictures both in the classroom, and outside. They loved going outdoors for a lesson. As we played, I introduced some key vocabulary such as framing, zooming, cropping and focusing. We also talked about light sources and ways to work with them.

I encouraged the students to think critically. I began by bringing in four pictures of my niece, and comparing them. Once they got over how cute she was, and asked me tons of personal questions about her name, her outfit and her stuffed kitty, I had them think about which of the four pictures they liked better, and why. I had them apply techniques such as framing your subject in the middle vs off-centre, and we compared the results.

In preparation for our October unit on social media, I also introduced the concept of consent, and they all readily grasped this. Some of them preferred not to take pictures of people, especially since we were outside for a lesson and there were other fun things to take pictures of. But if they did want to photograph a person, they were diligent about asking permission first.

It was a great start to our techie year! For our October work, we’ll be doing tablet drawing with the 1s, Kid Pix with the 2s, and social media with the 3/4s. I will update you when we’re done. And , and sooner or later I’ll have some words to say about e-books and the kids.