Thanks to Joe Biel, the ​Founder, Publisher and ​Owner of Microc​osm P​ublishing​, for this guest column. TeleRead welcomes others. 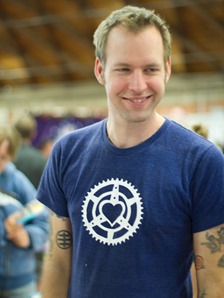 Microcosm Publishing is celebrating our 20th anniversary on February 12. We like to joke that we are the largest small publisher you’ve never heard of. ​Our titles focus on a message of self-empowerment for the reader and how they can create the world that they want to see.​

We’ve seen e-books rise from a rumor of a product that would change our industry in ways that no one dared to predict to fear-mongering about the death of print to a gradual launch and a veritable commercial flop. Yet every first-time author whom we sign pleads that we release their work as an e-book. Whenever I tell a stranger during a casual encounter that I am a publisher by profession, they either offer a sympathetic look and offer condolences for my “dying industry” or are shocked to learn that ​99 percent of what we sell are paper books. Amazon’s marketing dollars are spent so thoroughly that they have effectively changed public opinion about the current success of bookstores and what consumers actually prefer to read.

It often takes fifteen minutes to get a stranger’s assumptions on the table and to explain what the facts are: bookstores just had a record sales year and have been growing steadily. Paper books still comprise 95-96 percent of total industry sales, with e-books shrinking from their 2012 peak at eight percent of industry market share.

Of course, there’s bad news too: Even during record sales, the average publisher-supported book only sells 3,000 copies and the average self-published book only sells 250 copies. This, again, is mostly the fault of Amazon, which has successfully flooded the publishing landscape with unedited, undeveloped new releases through their publishing services. The total number of new books published every day in the U.S. has reached 4,000. It’s impossible for even the most fervent devourer of books to even know which titles of interest are released each month. Just keeping track of this information would be more than a full time job.

Generally, when I explain that current e-book sales hover around 4-5 percent of total industry sales with Amazon selling roughly two-thirds of these, people wonder how this is possible. They cite that their local bookstore went out of business during the depression and even the local Borders and Barnes & Noble stores closed. Without pointing out once again that Amazon is undermining price points on these retailers, I tend to explain that certain genres sell very well in electronic format. They tend to be “disposable” books that we read quickly and don’t think about again, the kind of thing we don’t want to shelve in our living rooms afterwards for when we try to convince someone of our worldliness: fantasy, vampire fiction, slash fiction, erotica, science fiction, etc.

Unlike Hachette, Microcosm has the luxury of not exerting much stress over the e-book debacle. Most of our books have a heavy focus on design, texture, paper choices, and varnishes which e-book readers lose out on. Microcosm, w​ith only eleven empl​oyees, has the advantage of having a trade distributor that actively sells our books into major wholesalers and retailers, so you can tend to find them at your local bookstore. Our e-book sales hover roughly around three percent of our trade sales ​ and one percent of our total sales​, with similar exceptions. For example, when we have a title that has an audience in the tech world, 30-50 percent of our sales for that title ​are ​ e-books. Perhaps due to the provocative title that people don’t want to be seen reading on the bus, Sarah Mirk’s Sex From Scratch continues to sell roughly 50 percent of its copies in e-books. Undeniably, this is also due to the outlets that featured the book. Related articles appeared on Salon, Boing Boing, and the like during the week of its release, and many people reading them did not want to wait for a paper book to arrive in the mail. They want the instant gratification ​of seamlessly transition​ing​ from reading the article to reading the book.

Naturally, a publisher could incline their list towards titles that sell well in electronic formats or are of interest to traveling business people or those who work in the tech industry and love their e-readers. A publisher could target media that reaches these kinds of readers. Even if the subject matter that they handle isn’t traditionally of interest to e-reader types, the pitches could be tailored to show how those books are interesting to that audience.

Of course, since the medium is already in decline within ten years after its launch, it’s probable that it will either see a major technological innovation, go the way of the laserdisc and BETAMax​,​ or globalism will create major logjams in paper supplies and e-books will be our de-facto option. But perhaps as David H. Rothman pointed out, the future of e-books is not just in commerce but also is in ​closing​ resource gaps for students, underserved people, and those geographically isolated or otherwise unable to have equal access to information as those of us living in the center of major U.S. cities. Frustratingly, publishers seem to see this mission as little more than a marketing opportunity when it fulfills one of Microcosm’s fundamental missions: giving readers the tools for self-empowerment in order to create a better world around them.

Yes, we’d love to sell more books in any medium, print or digital, and we will welcome practical suggestions from TeleRead community members, via the comments area.

​Microcosm has always bucked industry trends, and we’d love to change the current focus on e-books as disposable consumer products. Digital books need to be so much more. 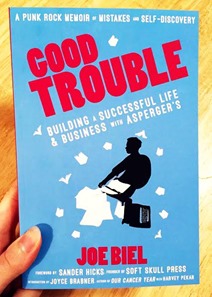 Note: The above facts and opinions are Joe Biel’s, not necessarily ours. This is the twelfth post in his Business of Publishing series. “Each article attempts to spread information about best practices within the the publishing industry and clarify common confusions.” ​Joe is a self-made publisher and filmmaker who draws origins, inspiration, and methods from punk rock, and he is also​ the founder/manager of Microcosm Publishing ​and co-founder of the Portland Zine Symposium. ​He​ tour​s​ with​ his films on the Dinner and Bikes program and have been featured in Time Magazine, Publisher’s Weekly, Utne Reader, Portland Mercury, Oregonian, Broken Pencil, Readymade, Punk Planet, Profane Existence, and Maximum Rocknroll. Check out Joe’s biographical video, as well as his forthcoming back: Good Trouble: Building a Successful Life and Business with Asperger’s, with an introduction by Sander Hicks (founder of Soft Skull Press) and a  foreword by Joyce Brabner (widow of the famous comic artist Harvey Pekar). Ordering information for the book is here. The Amazon page is here. A Kindle version of Good Trouble will appear in mid or late March.