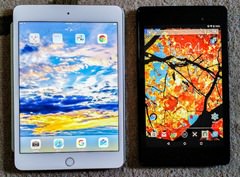 As he was working on an iOS-based project and his old iPad was getting a bit long in the tooth, John Scalzi recently acquired a new iPad Mini and had a few thoughts on the difference between the iPad and Android tablets as exemplified by the Nexus 7. Scalzi notes that he much prefers the smaller-tablet form factor to the larger one as exemplified by the iPad, the Surface, and their ilk—they’re easier to hold, and they feel more like their own thing rather than “hobbled laptops.” Even the iPad Mini is a little too large for him to hold comfortably with his smaller hands. (This makes it kind of ironic from my perspective that Google’s stopped making Nexus 7s, but oh well.)

The second thing about it is that it confirms another thing that I already knew, which is that Apple makes pretty, pretty objects that make you look cooler just for being near them. I don’t know what terrifying deal Jony Ive made with the devil, but it’s working, because in taking the Mini out of the box, I just about petted the thing and called it My Precious. You (or at least I) want to use Apple products in a sort of compulsive way that doesn’t apply to other manufacturers, and when there’s a problem, you (or at least I) feel like you’re letting the computing object down, rather than the other way around. It’s a little like dating someone who is vastly more attractive than you; you fumble about and try not to give it an excuse to leave you for (depending on your tastes) someone like Channing Tatum or Rosario Dawson.

Scalzi goes on to say that he likes his Nexus 7 just fine—especially given that it’s easier for him to hold and use—but it doesn’t make him feel “cooler.”

(Personally, I think Jony Ive has somehow figured out how to impregnate the casing of Apple products with some kind of tactile narcotic. Or maybe pheromones. But that’s just me.)

Scalzi also has a few words on the difference between the iOS and Android experiences overall—Apple actually tends to be slightly behind the times, as the iPad Mini is roughly equivalent in power and features to the two-year-old Nexus 2013, but that’s okay with the people who use iOS products. Apple seems to compete more with its own previous products than with what the rest of the world is doing, as people had by and large already chosen their gadget allegiance some time ago.

It’s an interesting post, and is worth reading in full, but for me, one of the more interesting things comes in taking a closer look at the side-by-side photo Scalzi took showing his iPad Mini and his Nexus 7. In particular, it’s interesting to consider what apps Scalzi has available on his Nexus 7, which he’s had amply long enough to customize to his uses (as opposed to the iPad, which he just got a week or so ago).

Scalzi doesn’t seem to have his Nexus arranged the way I do, with apps, folders, and widgets taking up every available slot of screen real-estate. Instead, he has just a few apps in his quick-launch tray and a few more at the corners of the screen. From that, we can make a few guesses, which might or might not be correct but are nonetheless fun to make.

For example, he has Gmail in the tray, but he’s also got Inbox in the folder just above it. I was going to guess that means he uses Gmail more than Inbox, but on the other hand, the only e-mail app in quick-launch on the iPad is Inbox, so maybe it’s what he uses more often but just hasn’t gotten around to swapping their places on the Nexus. (Also interesting: he has the Google app and Chrome visible on the iPad in addition to Safari. )

He also has the WordPress app in his Nexus quick-launch; perhaps he uses the tablet to compose the occasional blog post for Whatever? The only one I can’t seem to recognize is that X-shaped one, though I suppose it might be some kind of X window app for logging into a Linux box. And there’s also Facebook visible in a folder at the upper right.

But of particular interest to me is that there’s a single e-book app in that tray—the Nook Reader. Given that the tray is where you put the apps you use nearly all the time, I guess we now know where Scalzi buys most of his e-books.

Scalzi has mentioned before that he’s had and enjoyed a Nook e-ink reader for a while (and bought new one, a Nook Glowlight, after the first Nook bit the dust) because “they’re easy on the eyes and on power supplies.” So it makes sense he’d buy most e-books from there. He buys e-book copies of his own books because he can afford to, and is fully aware he could strip the DRM in the event B&N goes under. “But that takes work. I’m likely to avoid doing that work for as long as I possibly can.” An entirely sensible attitude, to be sure.

And there we have Scalzi’s tablet choices.