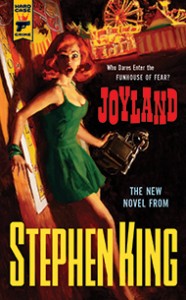 Remember when Stephen King expressly declined to put out an e-book edition of his new novel Joyland, out of nostalgia for the experience of reading paperbacks when he was a kid? He preferred instead that readers should have to “stir their sticks” to go and get a real print book. It turns out to have had the most amusing side-effect.

You see, eight years ago, an author named Emily Schultz wrote another novel called Joyland. And shortly after King’s book of that title came out, Schultz suddenly started getting angry and confused Amazon reviews from people who bought her e-book thinking it was the Stephen King book, only to be upset and disappointed when they discovered it was not. (But it’s entirely understandable they’d make that mistake! After all, if you searched for “Joyland e-book” only hers was available at the time!)

Schultz was annoyed at first at the possibility of these erroneous reviews hurting her book’s buzz…but that changed once she got her first significantly larger-than-usual royalty check for the mistaken purchases. Subsequently, she started a Tumblr called “Spending the Stephen King Money” on which to chronicle the purchases she makes with this windfall, and take a guess at how King might like her purchases.

King’s book has since been released in e-book form itself, so those windfall days are probably over. Nonetheless, it’s amusing to consider the possible unintended consequences of that sort of format decision. It’s also worth noting that this might suggest that fears over Amazon allowing folks to return e-books they don’t like could be overblown. If enough people bought the outright wrong book and yet didn’t return it to give the author a huge windfall royalty check, how many such returns could there possibly be?

Update: Entertainment Weekly spoke with King, who said of the mix-up, “I’m delighted for her, and I’m going to order her book.”